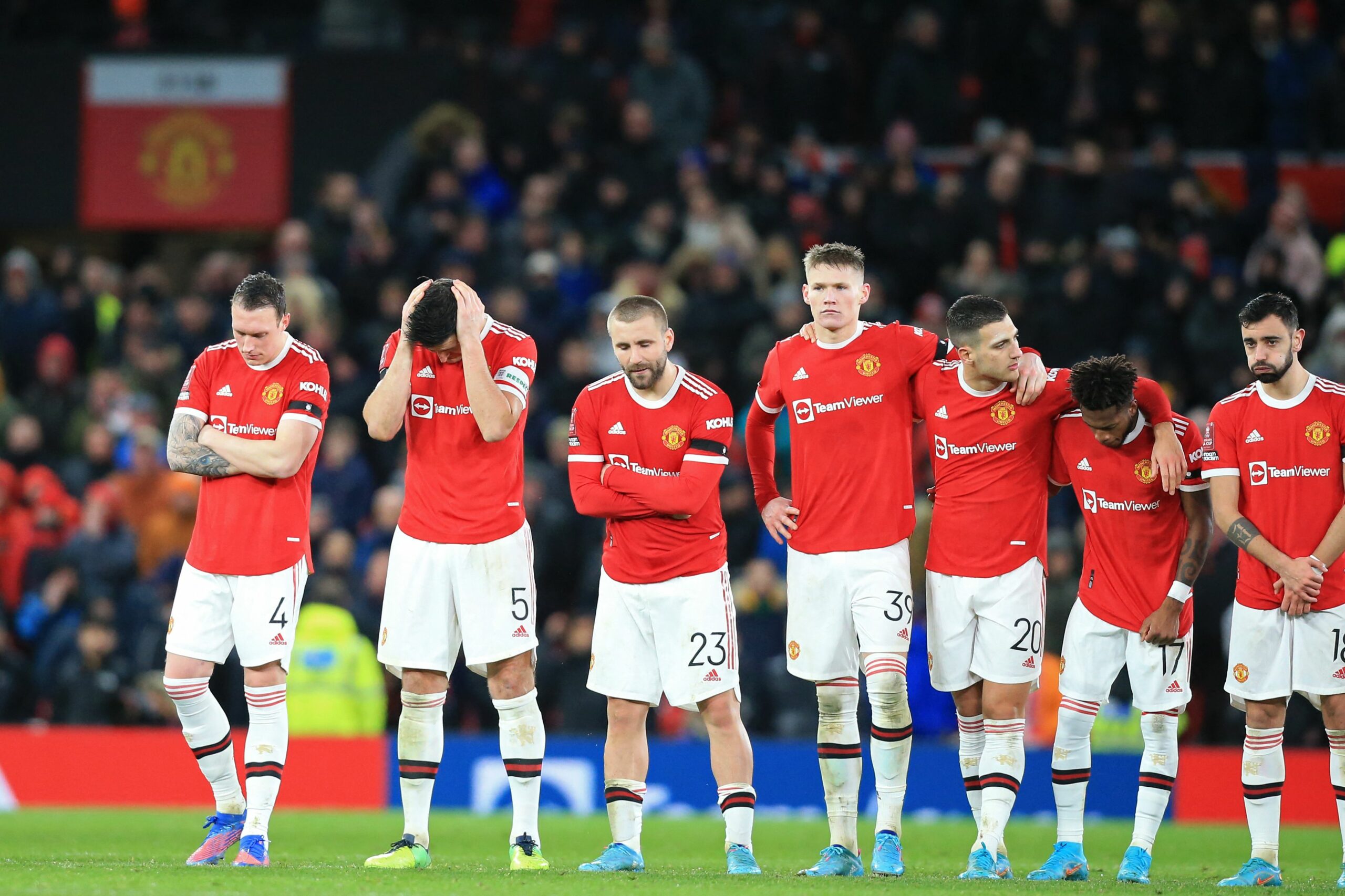 Manchester United were eliminated from the FA Cup in the fourth round after a penalty shoot-out defeat to Middlesbrough.

The Red Devils dominated the first half. They took the lead through Jadon Sancho’s deflected effort, which came five minutes after Cristiano Ronaldo had slammed a penalty wide of the post.

But the Championship side fought back and managed to bag themselves a controversial equaliser in the second half. Duncan Watmore lifted the ball across the box for Matt Crooks, who finished from close range.

There were no further goals, taking the game to a shoot-out. After seven successful penalties each, Swedish youngster Anthony Elanga was the unfortunate one to miss, blazing his attempt over the crossbar.

Here are five talking points from the match.

Look, we don’t want to take anything away from Middlesbrough. It was a great night for them. However, even the most die-hard Boro fan will admit that they were fortunate with their equaliser.

As Watmore controlled the ball, it bounced up onto his arm. He then crossed for Crooks, who had a simple finish.

According to the laws of the game, this is only ruled as a handball if it is deliberate, or if Watmore is the one to score the goal. As neither of these things are true, technically the goal was correctly awarded.

However, Watmore could have avoided using his arm, and it helped him gain control of the ball. If it hadn’t hit his arm, it probably would have gotten away from him. Using any common sense, the goal shouldn’t stand.

Jesse Lingard was strongly linked with a move away from Old Trafford this January. With the World Cup just over a year away, the player knows he won’t get back in the England squad while stuck on the bench at Old Trafford.

The 29-year-old was expected to make an appearance on Friday night but was surprisingly left out. Manager Ralf Rangnick claimed that he was given time off for personal reasons, while Lingard stated he was ready to play.

There is more to this situation than meets the eye. We don’t know what’s happening behind the scenes, but it can’t be good to have a player feuding with the manager.

It was a miserable night for Man Utd, but they can still take some comfort from the performances of Paul Pogba and Jadon Sancho.

The World Cup winner was making his first appearance for three months. He looked like the player we know he can be: strong, good on the ball, creative, influential.

As for Sancho, he was by far the hosts’ best attacker. He got himself on the scoresheet and was unlucky not to bag another one early in the game when his lob hit the crossbar.

Yes, it was against a Championship side. Nonetheless, it will be encouraging to see two heavily criticised players performing to a high standard.

Cristiano Ronaldo has been debated repeatedly since his return to Old Trafford back in September. During the game, the five-time Ballon d’Or winner’s name was on everyone’s lips again.

The forward’s impact on the team has been questioned throughout the season. Many people felt he wasn’t influencing the game enough – he wasn’t linking up well, he wasn’t pressing, he wasn’t creating.

Earlier in the campaign, it was easy to defend him. He was scoring goals. Goals win games. How could a player who scores regularly be a hindrance?

But now, Ronaldo isn’t getting the goals to justify his lack of an all-round game. Since Rangnick was appointed, he has found the net just twice – once from the penalty spot against Norwich City and the other from a rebound against Burnley.

Forget his name. Forget his 800 goals, five Ballon d’Or awards, and five Champions League. Forget everything he’s done in the past. Is Ronaldo currently doing enough to justify his ‘undroppable’ status in this Man Utd side? Right now, absolutely not.

Man Utd fans have been dreaming of Ronaldo’s return for about a decade. They probably expected his homecoming to be glorious and trophy-laden. But with every passing game, it’s starting to look like a mistake.

Another year without a trophy

It’s been four-and-a-half seasons since Man Utd’s last major honour. They haven’t gone five years without a trophy since the 1980s.

They were eliminated from the Carabao Cup early on and are currently 19 points behind Manchester City in the title race. The FA Cup was looking like their best hope.

But now it’s over. Unless they can pull off a shock by winning the Champions League, they will have to wait another year for a piece of silverware.

How many top players would want to play for Man Utd right now? Obviously they’ve got money, and history is also on their side. But if you wanted to win trophies regularly, the likes of Man City and Chelsea are far more attractive options.

The Red Devils have already fallen way behind their rivals. They cannot allow themselves to decline further.