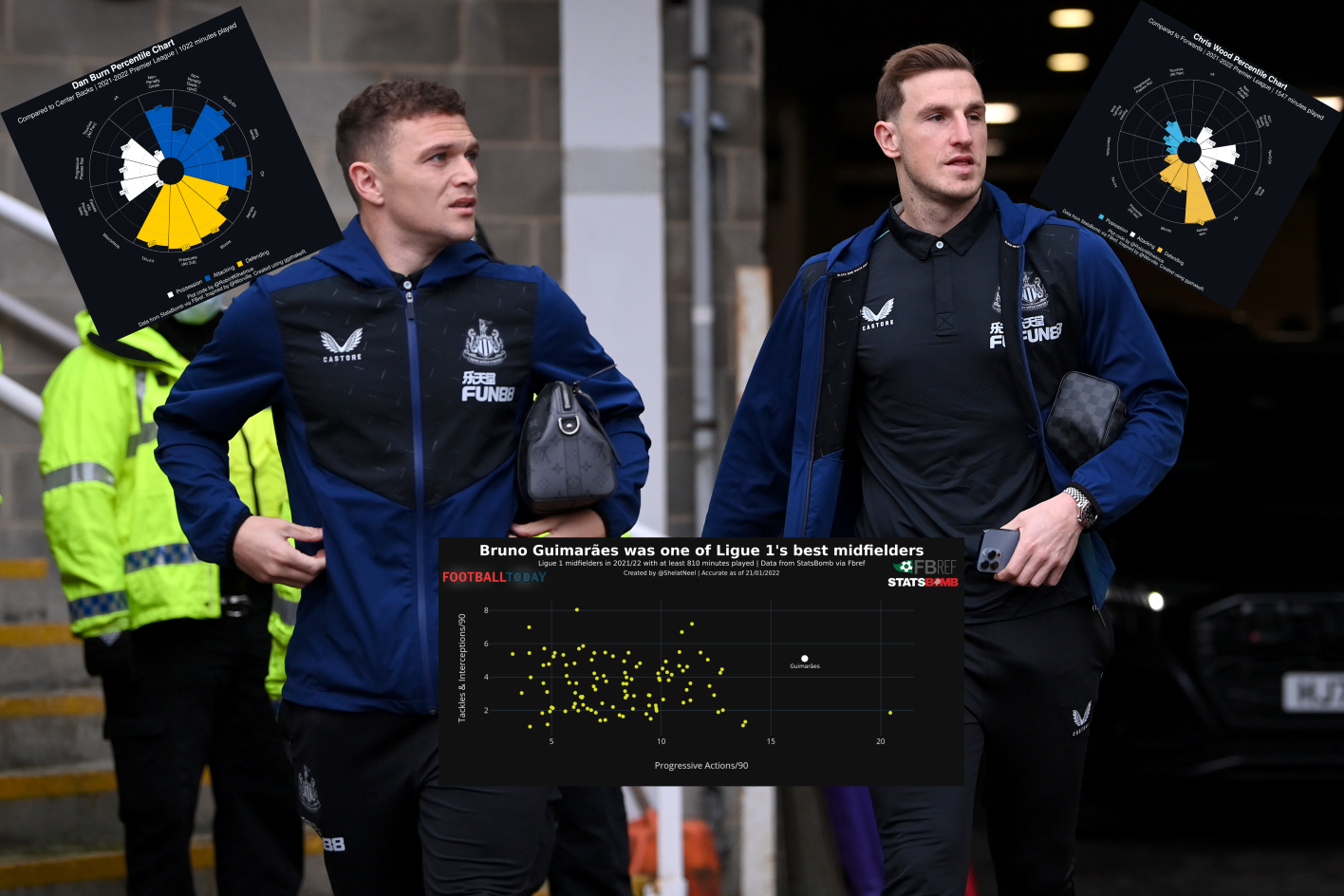 January 2022 was the month every Newcastle United fan was looking forward to once it became clear that the Saudi Arabia-led takeover of the club was set to be completed, as it was the first opportunity for the new owners to open their wallets and splash some cash.

They did just that, spending close to £100 million, which was comfortably more than any other Premier League club.

The primary short-term goal of all that investment will be to keep Newcastle in the top-flight, so let us take a closer look at some of their signings and see how they might be able to contribute to that cause.

Additionally, we will also go over some of the players they missed out on, and see if the ones signed instead were better options.

We start at the very beginning – Newcastle’s first signing of the window, which involved a £12m move for right-back Kieran Trippier from Atlético Madrid.

Although the 31-year-old full-back failed to register any goals or assists in the league for his previous club, looking at his numbers from the La Liga season, it becomes clear that he was not all that bad.

Defensively, he will certainly have more work at Newcastle, but that should not be an issue for a man who has recently played under Diego Simeone.

Trippier has had a return in the Premier League where he has not been bad but not caught the eye either in the two matches he has played so far, but as the quality of his teammates improves, his performances can be expected to do the same.

Newcastle United’s defence was their weakest link this season, so they desperately needed winter reinforcement in the centre-back department.

Initially, it looked like they would be getting one or more of Benoît Badiashile from Monaco, Diego Carlos from Sevilla and Sven Botman from Lille, but each of those clubs rejected the Magpies’ bids.

Badiashile would have been a very good signing as he is widely regarded as one of Ligue 1’s most exciting centre-back prospects, and his performances this season have certainly been up to scratch.

Carlos would arguably have been even better, as the 28-year-old Brazilian is more experienced at a higher level, with a Europa League winners’ medal among other things adorning his trophy cabinet.

Botman would have been the best option, though, as he is already very accustomed to defending in a low block at Lille, as is evident in his impressive aerial duel statistics.

In the end, though, the man Newcastle did get was Dan Burn from Brighton & Hove Albion in a deal worth about £12.5m.

He is not a bad option, as his numbers from the season look quite impressive and he is versatile enough to play in the right-back position if the need arises.

Newcastle probably would have liked to get a second centre-back in, but they should be reasonably happy with who they have signed.

Newcastle United did not manage to make any signings in the left-back area, though they were linked with a couple of players.

Most notably, they were reportedly trying to sign Robin Gosens from Atalanta, but he moved to Italian Serie A leaders Inter Milan instead.

The German international would undoubtedly have been a very exciting signing due to his attacking quality, while it would also be interesting to see how he would adapt to a back-four after spending so much time as a wing-back ahead of a back-three in Italy.

Another player linked with a move to Tyneside was 21-year-old Bayer Leverkusen full-back Mitchel Bakker.

He has had a subdued season in the German Bundesliga with a goal and just three assists to his name after making the move from Paris Saint-Germain, but he too would have been an upgrade on Newcastle’s current options.

Ultimately, a loan deal was struck on deadline day with Aston Villa for Matt Targett, who was set to lose game time under Steven Gerrard after the Villans signed Lucas Digne from Everton.

The 26-year-old Englishman’s numbers certainly look decent and they could yet improve further, particularly with regards to his average of 0.50 crosses into the penalty area per 90 this season should he link up nicely with a certain tall striker that Newcastle have signed.

Newcastle broke their club-record transfer fee when they signed Bruno Guimarães from Lyon for almost £42m including bonuses. If you have seen him play, you will know why.

The only real surprise here was that none of the clubs closer to the top of the table made a move for the Brazilian international, as the 24-year-old midfielder was undoubtedly one of the most impressive players in his position in Ligue 1 this season.

With an average of 16.54 progressive actions (both through passing and carrying) and 5.11 tackles and interceptions per 90 this season, he was quite simply in a league of his own.

Having played in a double pivot at Lyon, it will be interesting to see how Eddie Howe uses Guimarães in his 4-3-3 or whether he switches to a 4-2-3-1.

The latter seems a wise option as it would allow him to restore Joelinton to his natural role behind the striker, while Jonjo Shelvey should be a decent holding midfield partner for the new signing.

A fair few strikers were linked with Newcastle in the early days of the transfer window after Callum Wilson suffered a season-ending injury, but they got the job done quite early by signing Chris Wood from fellow relegation battlers Burnley for about £25m.

Although yet to open his account for the Magpies, Wood has made a decent impression in the two matches he has played so far, but there is no doubt that a decent chunk of that price tag was paid due to the fact that he was being signed from a direct rival.

Newcastle were looking to weaken Burnley here, but that plan may have ended up backfiring.

That is because the Clarets have gone and signed Wout Weghorst from Wolfsburg with some of the money they made from Wood’s sale.

With just six goals and an assist to speak of in the German Bundesliga this season, Weghorst has had an underwhelming campaign (much like his club), but his underlying numbers are still better than Wood’s.

The Dutch international has scored 14 or more league goals in each of his previous seasons from 2014/15 in a run that includes his Eredivisie days with Heracles and AZ Alkmaar. If he can keep that record going, Newcastle will undoubtedly have a very tough relegation battle on their hands.

Additionally, after a bit of a transfer saga, Newcastle also looked set to sign exciting teenage prospect Hugo Ekitike from Reims for over £20m on deadline day.

The 19-year-old striker has scored eight goals and set up two others so far this season, and his underlying numbers also look very impressive.

Ultimately, the deal did not go through, but it would have been interesting to see how he might have been used.

Ultimately, it has been a mixed window for Newcastle. Their biggest disappointment will be failing to sign a second centre-back.

Signing Wood from Burnley must have been considered a positive initially, but after the Clarets brought Weghorst in, Newcastle’s outlook on the deal might have changed. The biggest success has to be Guimarães, who truly is a statement signing.

No amount of money from new ownership can make a difference anymore as the transfer window has closed, so now Newcastle’s players are all on their own in the battle against relegation.

Stats courtesy Transfermarkt, Opta via WhoScored, and StatsBomb via Fbref.