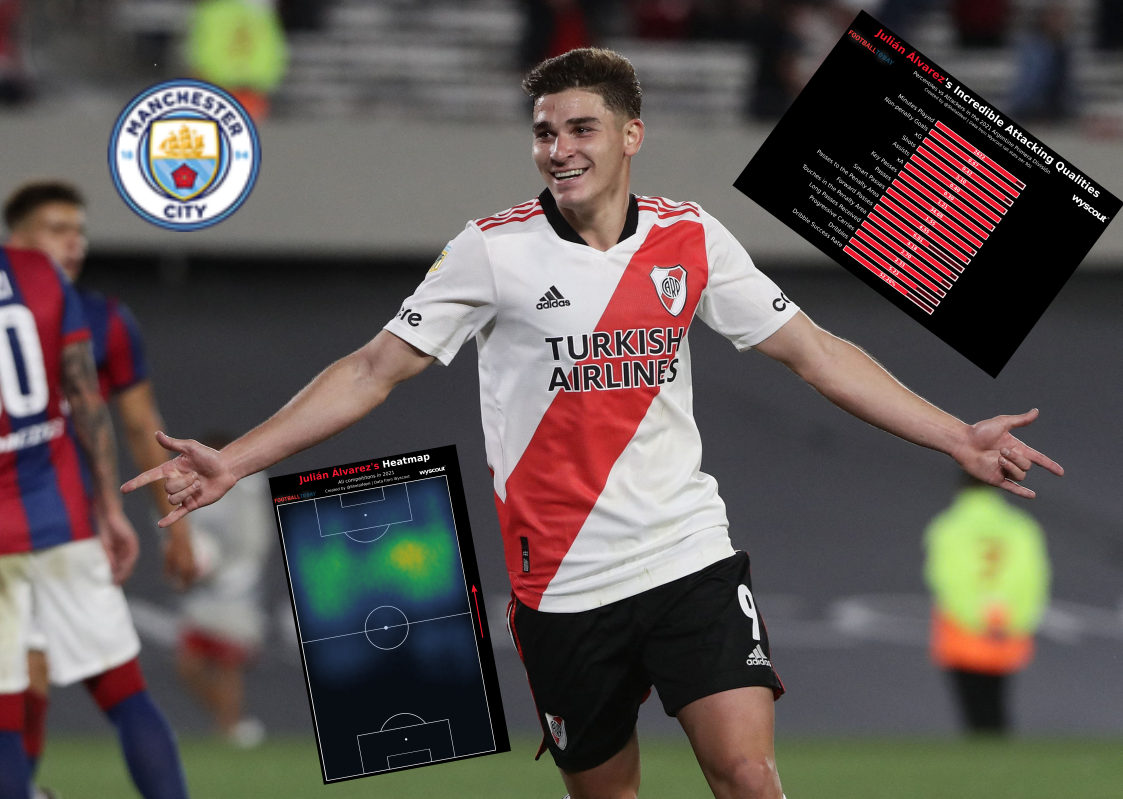 Julián Álvarez is a name most football fans must have heard in the last few weeks.

The 21-year-old Argentine forward absolutely ripped up the Liga Profesional as he finished on top of the scoring charts with 18 goals and six assists for 2021 champions River Plate, and he has since attracted interest from all over Europe.

Manchester always looked to be his most likely destination, but initially, United seemed to be in pole position for his signature.

However, they decided against signing him, clearing the way for local rivals City to step in. The English Premier League champions will reportedly pay around £14 million plus bonuses to River Plate for Álvarez, who will remain at the club on loan until the end of the European season.

The 21-year-old attacker is a graduate from the River Plate academy, but he failed to make a big impression in his first two professional seasons with just six league starts.

Things changed last year, when he also earned his first call-up to the senior Argentina squad, for whom he has made five appearances so far. Let us learn more about his qualities by analysing his breakthrough season.

Although primarily described as a striker by the media, Álvarez is equally capable of operating behind a centre-forward or on the right-wing.

Looking at his heatmap, it becomes clear that the Argentine forward can operate all over the pitch in attack, although he does seem to favour the right half-space.

As aforementioned, Álvarez was simply phenomenal last year with 24 goal involvements in the league, so his statistics look superb.

The first thing that pops up here is the overperformance relative to xG. His 18 league goals last season came from a total xG tally of 12.41, which indicates a reasonably unsustainable conversion rate, but the 21-year-old attacker certainly is an excellent finisher.

He does seem to have all sorts of goals in his locker — ranging from tap-ins from cut-backs to long-range screamers and, perhaps most encouragingly for City, very clinical one-on-one finishes with both feet.

Additionally, Álvarez is also able to help his team by creating chances. Twelve league assists from an xA (Expected Assists) tally of 9.04 is very good, and the fact that he ranked in the 99th percentile among attackers for key passes last season shows that he is a high volume creator.

The most prevalent pattern in the Argentine international’s assists is cut-backs from the right of the box, which is another thing that Pep Guardiola has to appreciate.

Apart from this, Álvarez’s link-up play also looks impressive in the statistics which show a very high volume of passing, and his receiving and ball carrying do not seem bad at all.

All of this, along with the fact that he works pretty hard off the ball with an average of 2.5 interceptions per 90 in the league last year, makes the Argentine forward a very complete attacker.

The only real weakness in his game is that his relatively lean frame means he is not the strongest man in aerial duels, but that should not be a problem for a side like Manchester City.

While it is true that the jump from the Liga Profesional to the best side in the English Premier League is a big one to make, one big advantage for Álvarez is that he is playing for a team that is not overly different from City in terms of playing style. This should undoubtedly be beneficial in helping him adjust to new surroundings.

At just 21 years of age, the Argentine international is far from a finished product and has a lot of time to improve his game under Guardiola.

Therefore, this signing should not impact City’s search for an elite striker, which will probably continue in the summer.

Álvarez is most likely one for the future, where in the best case he will become an integral part of City’s next generation, and in the worst case, they will sell him on for a profit after developing his game further.

For the short term, Álvarez will remain in Argentina, where it should be interesting to see if he can reach the incredibly lofty standards he set for himself last season.