Scout Report: Niklas Süle could be a secure centre-back summer signing for Chelsea, Tottenham Hotspur and others 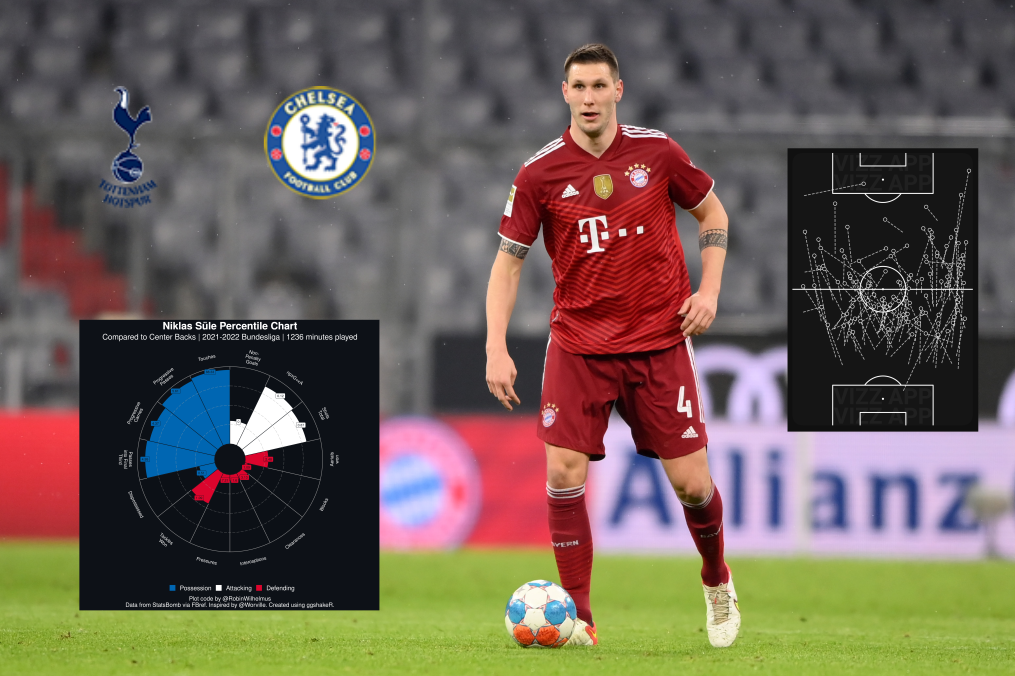 After Jérôme Boateng and David Alaba departed last summer, Bayern Munich look set to lose another key centre-back as Niklas Süle has reportedly turned down a contract extension offer and will leave on a free transfer in the summer transfer window.

At 26-years-old, the ex-Hoffenheim man still has a few years at the peak of his abilities ahead of him, so top clubs around Europe should be monitoring his situation and could make a move to get his signature on a pre-contract soon.

Let us look at his game to understand which destinations are most suitable for him.

Süle is a right-footed centre-back, capable of playing on either side, whether in a two or three centre-back system.

Although he has spent a fair amount of time at right-back this season, the German international is not a full-back by any stretch of the imagination.

The explanation for this lies in Julian Nagelsmann’s tactical system at Bayern, which sees the Rekordmeister switch from a back-four to a back-three of sorts in possession with the left-back getting forward and the right-back operating as an auxiliary full-back in a role similar to that of a wide centre-back.

So, it only really makes sense to compare Süle with centre-backs.

While his percentiles in defensive metrics are not high, this is not necessarily a bad thing. First of all, Bayern’s league-high average of 59.2% possession this season means that their players have less defending to do.

Additionally, most good centre-backs do not need to make too many challenges as their primary responsibility is preventing such situations.

This should not be a concern, as is proven by the fact that he has been dribbled past less than once in four matches on average in the current Bundesliga season.

Looking at his defensive actions heatmap, it becomes clear that the ex-Hoffenheim defender avoids engaging in duels high up the pitch as much as possible and does most of his work in and around the penalty area.

Among the reasons for this is his relative lack of pace, as his top speed of 33.66km/h in the current Bundesliga season places him outside the top 100 in that regard.

One thing that certainly pops out in the above pizza chart is Süle’s superb ball progression through passing and carrying, which is where his greatest strengths lie.

An average of 10.05 passes under pressure per 90 in this Bundesliga season shows that the German international does not crack under pressure, while his pass completion rate of 91.2% shows that he does have the ability to be secure with the ball.

Süle often gets his team far up the pitch with his passing, as evidenced by his average of nearly five passes into the final third per 90 in the league this season.

His ball carrying is also exceptional, with 4.37 progressive carries and 1.31 carries into the final third. A lot of his progressive carries seem to end close to or inside the centre circle, but an encouraging pattern is that he quite likes to get forward in the half-spaces too.

The only real concern clubs might have regarding signing Süle are his injury issues. While he has had some minor problems reasonably regularly of late along with fitness issues, the only two significant spells on the sidelines have come after cruciate ligament ruptures in 2014 and 2019.

He certainly did not seem to be rushed back in either case, so hopefully, this will not be a problem in the future.

Strictly focusing on his footballing ability, though, there can be few arguments against the fact that Süle is a complete centre-back.

It is looking quite probable that Süle will end up in the Premier League. In the unlikely event that he chooses not to, one of his options might be Barcelona, where Xavi uses a system with a similar right-back role to what the Bayern centre-back is familiar with.

The most sensible option for all involved parties looks to be Chelsea, where Süle could be brought in as a replacement for Antonio Rüdiger or Andreas Christensen, both of whom are in the last months of their contracts and have not signed an extension yet.

…whereas Christensen has a much higher volume of defensive actions than them.

Another good option in England might be Chelsea’s good friends Tottenham Hotspur, where Süle should be able to slot right into Antonio Conte’s back-three system, with the club certainly lacking top-quality options, as well as depth in the centre-back department.

Newcastle United are almost guaranteed to be involved in any transfer rumours after their takeover. However, there are no guarantees that they will still be in the top-flight next season, and whether Süle is only looking for very lucrative wages remains another question.