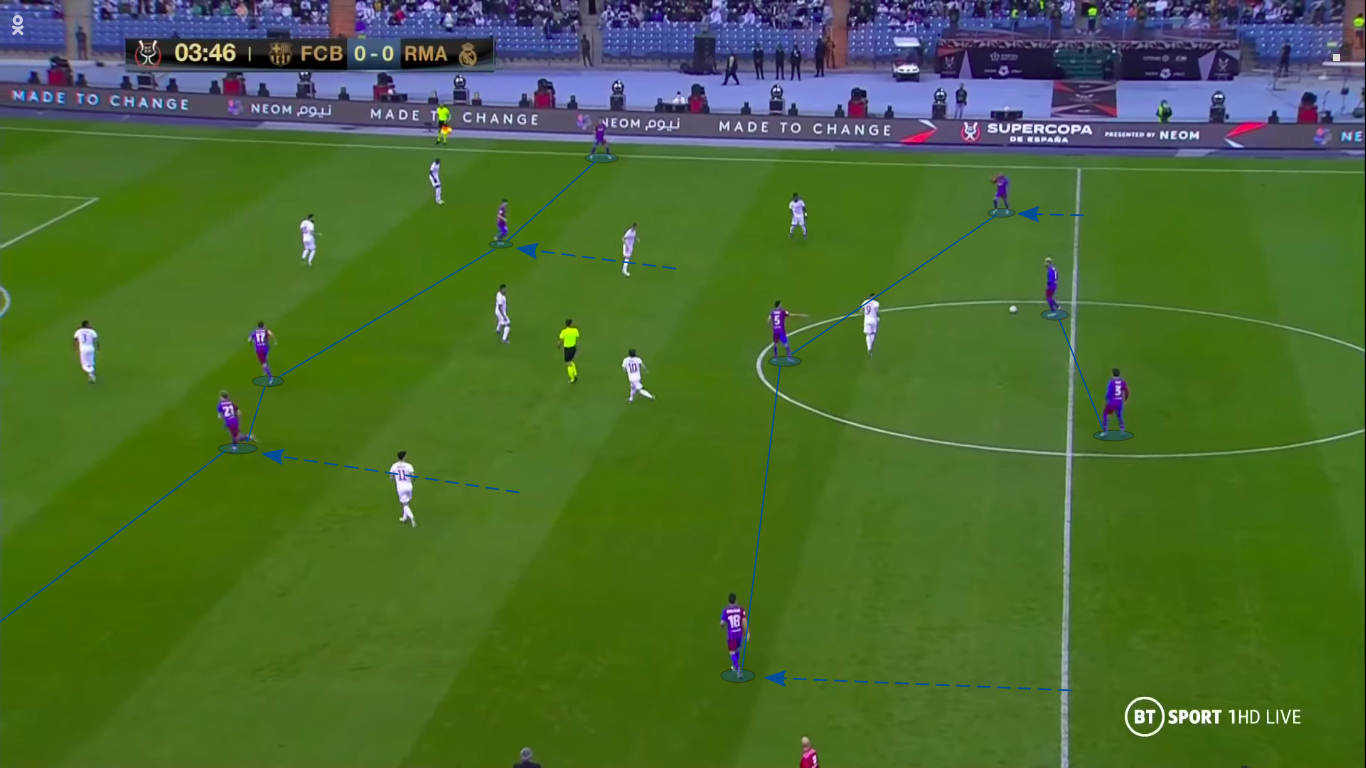 For the first time as their manager, Xavi watched Barcelona take on Real Madrid in an El Clásico, with a spot in the final of the Supercopa de España at stake besides the small matter of bragging rights.

This was the 248th competitive meeting between the two sides, adding another chapter to the legendary El Clásico rivalry.

There were few surprises in the line-ups, although seeing a 38-year-old Dani Alves deployed at right-back against a winger in the form of his life must have been a bit of a surprise for everyone.

The narrow 2-3 defeat in extra time drew a very positive reaction from Barcelona fans, but it should be said that this is far from the best version of Madrid from a tactical viewpoint, and they were never going to challenge for possession against a side that likes to keep the ball.

Therefore, having the larger share of possession should not be considered a sign of significant improvements made under Xavi for Barcelona, but rather a reflection of both sides’ approach to the match.

Typically, Xavi’s Barcelona has transitioned to a 3-2-5 of sorts in possession, with the left-back pushing all the way forward and the winger on that side staying narrow, while no such rotations were made on the right.

He seemed to ask both full-backs to be conservative with their positioning in possession, so the shape looked more like a 2-3-5 with Sergio Busquets alone in holding midfield.

Madrid’s narrow 4-3-3 focused on staying centrally compact, so Barcelona were often forced to go out wide in their attacks. With just one man on either wing, it was easy for Los Blancos to contain them.

Ousmane Dembélé still managed to produce something with his one-on-one dribbling qualities, but Ferran Torres on the right was not having a good time at all, as we predicted while analysing how he might fit into Xavi’s current system.

After going a goal down, Jordi Alba started to overlap occasionally on the left, which immediately made Barcelona a lot more dangerous on that flank.

The goal originated from this region, and that too after Dembélé and Alba had delivered decent crosses for Luuk de Jong with crosses from the wing. Ultimately, Dembélé alone created the equaliser, which came after a fairly lucky deflection for de Jong.

One of the main pitfalls of Barcelona’s approach in possession was they just left one man in central midfield to protect the defence in transition.

Therefore, if he was bypassed, there would be a gaping hole in the middle for Madrid to exploit. That is precisely what happened before the opening goal.

Additionally, Xavi’s extremely man-oriented defensive approach has been a problem throughout his time at Barcelona, which was also highlighted in this match.

Out of possession, his side was set up to press high up the pitch in a 4-4-2 with Gavi pushing up alongside de Jong.

Given Madrid’s fluidity in possession, this issue was highlighted further. For the third goal of the match, the move started with Vinícius Júnior dropping into midfield and leaving Ferland Mendy one-on-one against Alves.

The French full-back got past his man and found Karim Benzema in the box. While his first shot was saved, Benzema was there again for seconds and made sure of finding the back of the net then.

A goal from the second phase of a set-piece for Barcelona took the game to extra time, but another goal conceded by them in transition proved to be the decider in the match.

The main lesson for Barcelona from this is that while they have improved in possession under Xavi, they still have a lot to do defensively to become a complete side once again.

As we mentioned, the match going to extra time is more of a reflection of how Madrid are not an extraordinary side than being a major positive for Barcelona.

In Madrid’s case, the dynamic duo of Benzema and Vinícius delivered another victory by chipping in with a goal each and an assist in Benzema’s case.

Those two are also the main reason why Los Blancos are at the top of the La Liga table, and whether they can stay there until the end of the season is another question that their attacking duo will most likely answer.