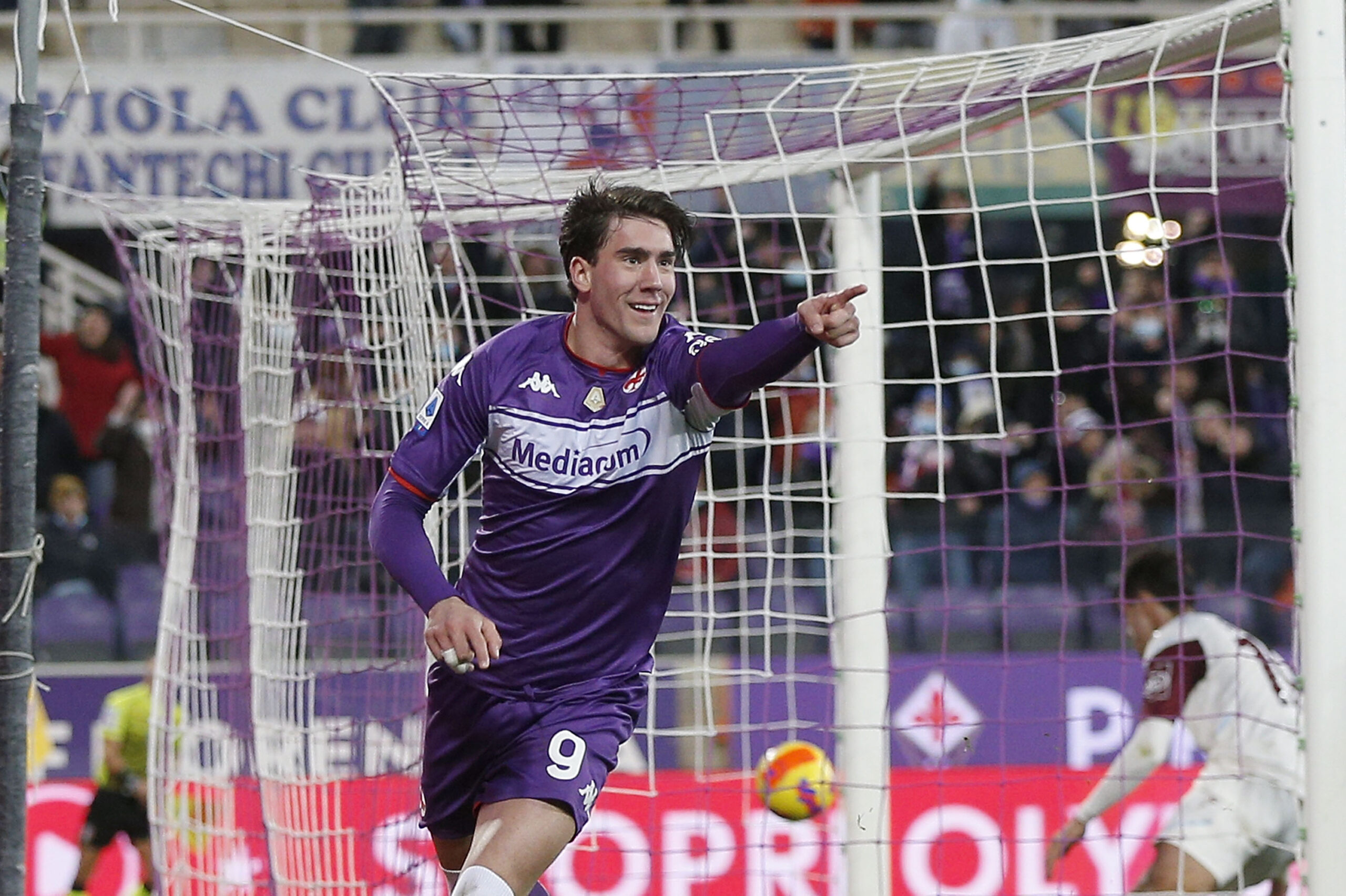 2022 is an exciting year to be a football fan. We’ve got all the usual stuff we know and love about the sport – title races, relegation battles, big finals and a World Cup to round off the year.

In anticipation of the year ahead, we’ve decided to have a look at some young players who could be in for a big year.

Steering clear of the obvious shouts – the likes of Erling Braut Haaland, Pedri, Jude Bellingham and others who already have plenty of top-level experience – here are our picks for the best young players to watch in 2022.

And he’s not too bad either. The stopper earned some praise earlier in the season for a fine performance against Paris Saint-Germain, most notably denying Kylian Mbappe on several occasions.

There could be some competition for Green on the international stage. He was born in England and played for the England under-21s side, but has a French mother and has lived in France since the age of four.

Two years on, and he is still showing plenty of promise. Standing tall at 6’4″, the Belgian has kept five clean sheets this season in all competitions.

Should he continue at his current rate, he could be Belgium’s long-term replacement for Thibaut Courtois. The Real Madrid man also started his career at Genk.

There could be a real scramble for his services at international level. He played for England during his days in the youth teams, but could have some trouble earning a senior cap over Trent Alexander-Arnold, Reece James and Kyle Walker.

Alternatively, he could declare for Italy, Portugal, or Scotland, all of whom he qualifies for through family links.

Nico Schlotterbeck (Freiburg) – Freiburg are proving to be something of a dark horse in the Bundesliga this season, currently sitting in third place. A big reason for this is their defensive solidity, having conceded the fewest goals in the league.

The 22-year-old has started every league game this season, keeping six clean sheets and scoring twice. While he remains uncapped, he has been called up by manager Hansi Flick for Germany’s World Cup qualifiers.

He was part of the Italy squad that won the European Championships last summer and has continued to perform with ten clean sheets in all competitions this term.

With Italy’s centre-back partnership of Giorgio Chiellini and Leonardo Bonucci well into their thirties, the Azzurri will need someone to step in soon. Bastoni could be the perfect man for the job.

Goncalo Inacio (Sporting Lisbon) – Sporting remain unbeaten in the league and made it through their Champions League group ahead of Borussia Dortmund and Besiktas. Youngster Goncalo Inacio is proving to be one of the standouts in their side.

The 20-year-old has helped the club to nine clean sheets in all competitions. In addition, he has provided a threat at the opposite end of the pitch, notching three goals.

Josko Gvardiol (RB Leipzig) – RB Leipzig may be having a disappointing season, residing in tenth place, but they still have something to smile about. Young defender Josko Gvardiol is emerging as one of the world’s brightest talents.

A versatile defender, Gvardiol primarily plays as a centre-back but lined up on the left side of defence at Euro 2020 for Croatia. This season, he has scored once, assisted twice, and kept five clean sheets.

Tyrick Mitchell (Crystal Palace) – Since the arrival of Patrick Vieira to Selhurst Park, Tyrick Mitchell has been a valuable part of the Crystal Palace squad. He has started all 20 league games under the Frenchman, and he leads the league in tackles with 60.

England’s left-back spot is uncertain. Ben Chilwell is expected to miss the rest of the season, and Luke Shaw is out of form.

Mitchell could get himself in with an outside shot of making the Three Lions’ World Cup squad if he keeps performing to his current level.

Tyrell Malacia (Feyenoord) – Tyrell Malacia made his professional debut at Feyenoord as an 18-year-old. Four years on, and he is really starting to prove himself.

He is a capable left-back at both ends of the pitch. He has started every league game for a side that boasts the second-best defensive record in the Eredivisie, and he has also notched a goal and three assists. His performances earned him a first cap for the Netherlands back in September.

Yeremi Pino (Villarreal) – Villarreal’s season has been mixed, qualifying for the knockout rounds of the Champions League, but falling to eighth in La Liga. Nonetheless, the emergence of Yeremi Pino will be encouraging to them.

The Spaniard was mostly a bench player last season, but this year has worked his way into the starting XI. He has four assists in the league – including two against Atletico Madrid – to go with his three goals.

Nico Williams (Athletic Bilbao) – Not to be confused with the Welsh full-back who plays for Liverpool, Nico Williams is part of an Athletic Bilbao defence that has conceded 17 goals in La Liga this campaign – only Sevilla have shipped fewer.

The omens are encouraging for the teenager. He is the younger brother of striker Inaki Williams, who has gone on to have a very respectable career for the Basque club.

After winning Ligue 1 Young Player of the Year in 2020/21, Real Madrid and Chelsea have been linked with a move for the 21-year-old.

The Frenchman is considered to be something of an all-rounder. He’s tall, strong, and good on the ball. If he could add more goals to his game, he could be a terrific midfielder.

Tchouameni could also be one to watch at the World Cup. He has made seven appearances for France, playing the full 90 in the Nations League final against Spain back in October. Albeit that was in the absence of N’Golo Kante, but it should be interesting to see whether he keeps his place.

Eljif Elmas (Napoli) – North Macedonia have a tough task qualifying for the World Cup, having been drawn in the same play-off path as Portugal, Italy and Turkey. If they somehow progress, they would need Eljif Elmas to be at his best.

The midfielder was a key part of their qualifying campaign, scoring four and assisting two in his ten appearances. At club level, he has been performing to a similar level, bagging six goals to go with his three assists.

Florian Wirtz (Bayer Leverkusen) – Many young players have emerged this season, but few have made more of an impact than Florian Wirtz. The 18-year-old is turning heads all around the globe with some brilliant displays for Bayer Leverkusen.

Despite his age, Wirtz has already made 51 appearances in the Bundesliga, 13 in the Europa League and four for the Germany national team. His tally of eight league assists is bettered only by Thomas Muller.

Emile Smith Rowe (Arsenal) – Arsenal are having one of their best seasons in recent years, sitting inside the top four at the time of writing. Manager Mikel Arteta has put his faith in the youngsters, and we are seeing the benefits.

Emile Smith Rowe has been one of the standouts for the Gunners. He is the fourth top scorer in the Premier League with eight, behind Mohamed Salah, Diogo Jota, and Jamie Vardy.

In November, he made his debut for the England national team against Albania, and he scored his first goal on the international stage in the next match against San Marino.

Maintaining a place in the squad will be difficult with all the high-quality competition in his position, but he has certainly earned his spot so far.

Noa Lang (Club Brugge) – In the summer, Noa Lang was heavily linked with a move to Leeds United. However, Club Brugge held firm and kept the Netherlands international in Belgium for another year – and they will be thankful that they did.

Last season, Lang was one of the best players in the Belgian Pro League, winning the Young Player of the Year award after recording 16 goals and seven assists. He has picked up exactly where he left off with a further six goals and ten assists this term.

Cody Gakpo (PSV Eindhoven) – PSV Eindhoven have fallen short of the Eredivisie title in the last three seasons, with Ajax winning three on the spin. This year, they are on course to end their short trophy drought, as they currently sit at the summit.

Cody Gakpo has been one of the main reasons for their strong first half of the campaign. The Dutch winger has scored six and assisted nine in the league and added four strikes in Europe.

Dusan Vlahovic (Fiorentina) – Many of Europe’s top clubs are in the hunt for a new striker. While Erling Braut Haaland is the holy grail, Dusan Vlahovic has been touted as an alternative to the Norwegian.

The Serbia international has hit 16 goals in Serie A this season – only Robert Lewandowski has struck more in Europe’s top five leagues. This comes after a wonderful breakthrough campaign in 2020/21 when he netted 21 in the league.

Vlahovic has all the attributes required to be a top striker. He’s tall, strong, quick, a good dribbler, and a deadly finisher on both feet.

He switched his international allegiance to Chile, where he has become something of a national hero. The forward lined up alongside Eduardo Vargas at the Copa America, scoring one goal in the win against Bolivia.

His spell with the Chilean team has done him a world of good. This season, he has found the net on 20 occasions for Blackburn Rovers, more than replacing the outgoing Adam Armstrong.

He is two goals behind Aleksandar Mitrovic in the Championship’s Golden Boot race as things stand.

The Italian forward is yet to make his full debut for the Bergamo outfit. Although, he has made ten substitute appearances totalling 96 minutes, scoring an injury-time winner in their clash with Torino back in August.

Darwin Nunez could be the next man to join that list. The Uruguayan is the top scorer in the Liga NOS with 13 in as many appearances, helping his side to third in the league.

He also scored three in the Champions League group stages, including one against Bayern Munich and a brace against Barcelona.

Lois Openda (Vitesse) – Lois Openda has spent the last year-and-a-half on loan at Vitesse from Club Brugge. The striker is enjoying his second season in the Eredivisie, netting ten in 18 outings.

In addition, his record for the Belgian youth teams is excellent. Should he keep this up, he will surely be in line for a place in their World Cup squad as Romelu Lukaku’s understudy.

Read also: Halfway through – Premier League Team of the Season so far.