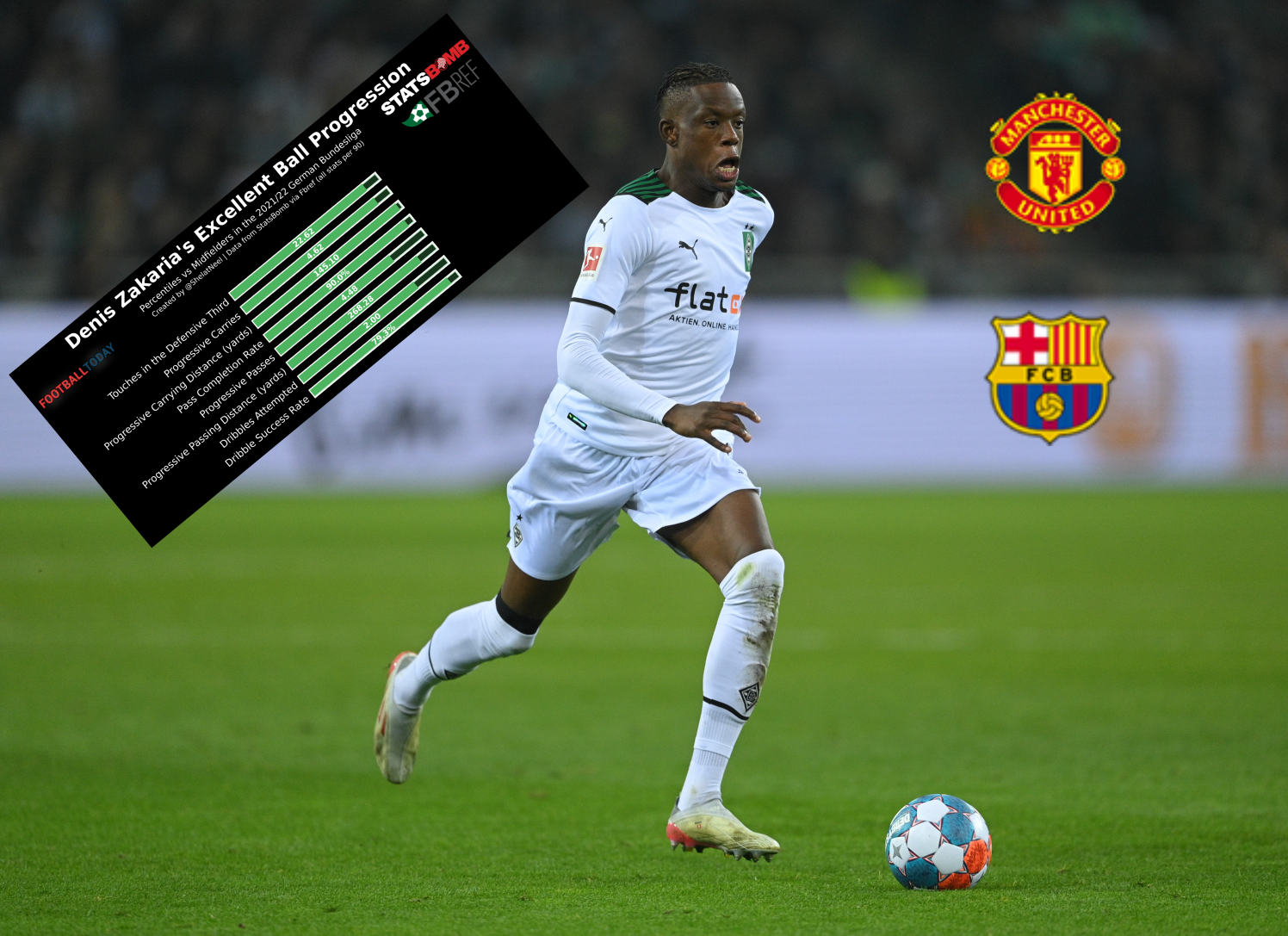 Borussia Mönchengladbach might be having a bit of an exodus in the summer, as the club have already confirmed that both Denis Zakaria and Matthias Ginter will be leaving on free transfers once their contracts expire.

We have already looked at Ginter and where he might end up, so now it is time to give Zakaria the same treatment.

Zakaria, who recently turned 25-years-old, is a senior Swiss international with 40 caps to his name.

After making 50 Swiss Super League appearances for Young Boys, he was sold to Gladbach for about €12 million. He has made 144 appearances for Die Fohlen, including 11 in European competitions.

In terms of playing positions, Zakaria can primarily be classified as a defensive midfielder, although he is also capable of doing a job at centre-back.

Of course, being a defensive midfielder by nature, he is better suited to a back-three than a two centre-back system while playing in defence.

The Swiss international’s percentile pizza chart when compared to midfielders does not make him look too good in possession, but there is good reason for that.

Quite simply, this is because Zakaria is a very defensive midfielder, so most of his on-ball work is done in the lower areas of the pitch. Therefore, his ball progression stats look pretty impressive:

The Servette youth academy graduate is more than capable of getting the ball forward through passing and carrying and can also beat his man if needed.

He tends to receive in fairly deep areas, as is depicted in this heatmap:

His progressive passes originate all over midfield…

…but usually end up in the central areas of the attacking third, which is a very good area for that to happen.

After helping his side get forward, Zakaria’s job generally is to stay back and screen his defence. This is proven by the fact that he has averaged less than one touch in the penalty area per 90 in the league this season, meaning he does not tend to get far forward at all.

The 25-year-old midfielder is then responsible for snuffing out opposition counterattacks, which is why his defensive actions heatmap shows that his work out of possession is scattered all over the place…

…, or mopping up loose balls, which is why he ranks third in The Analyst‘s selected possession adjusted defensive statistics for the current Bundesliga season with 14.54 recoveries per 1000 opposition touches.

The stats show that he is well-suited to this role, blocking 2.48 passes per 90 and getting dribbled past just over once in that time frame.

Zakaria is a very secure defensive midfielder capable of getting the ball forward exceptionally well and protecting his defence after doing so.

Zakaria’s impressive performances have certainly not gone unnoticed, as various elite European clubs have been linked with him in the last couple of years.

Currently, Bayern Munich, Barcelona and Juventus are said to be interested in his signature in the summer along with two English clubs, believed to be Liverpool and Arsenal.

Bayern and Liverpool could do with some depth in defensive midfield (especially Die Rekordmeister, who have had their troubles with Joshua Kimmich contracting COVID-19), but the question is whether Zakaria would want to settle with being a squad player.

That sort of role at Arsenal is being fulfilled to very good effect by ex-Gladbach man Granit Xhaka, so a similar problem may arise there.

Barcelona have a host of young talent coming through in midfield but no apparent heir to 33-year-old Sergio Busquets, so Zakaria could well be a good fit there if he is happy to play second-fiddle for a season at least.

Juventus are also lacking high-quality midfielders, but Zakaria’s profile might be too similar to that of Manuel Locatelli for that move to make much sense.

The best direct fit at an elite club for the Swiss international seems to be Manchester United, where he could easily prove to be a stylistically-similar upgrade on Scott McTominay, whose ball progression ability has raised concerns for a while now.

If Zakaria is willing to move to a club a level below the elite sides, then the likes of Borussia Dortmund and West Ham United should be interested too.

The Hammers do not need a defensive midfielder, but if Declan Rice chooses to move on in the summer, the 25-year-old Gladbach man would be a brilliant replacement.

For BVB, a defensive midfielder of such quality would not be a bad thing at all, and given the fact that Marco Rose only left North Rhine-Westphalia last summer, they could have the upper hand in negotiations.

Irrespective of where Zakaria ends up, Gladbach will regret losing him for nothing, but the beneficiaries will undoubtedly be quite glad.

Stats courtesy Transfermarkt, StatsBomb via Fbref and Opta via Vizz App and The Analyst.

Where could Ousmane Dembele go this winter?
Europe’s Top Goalscorers in 2021