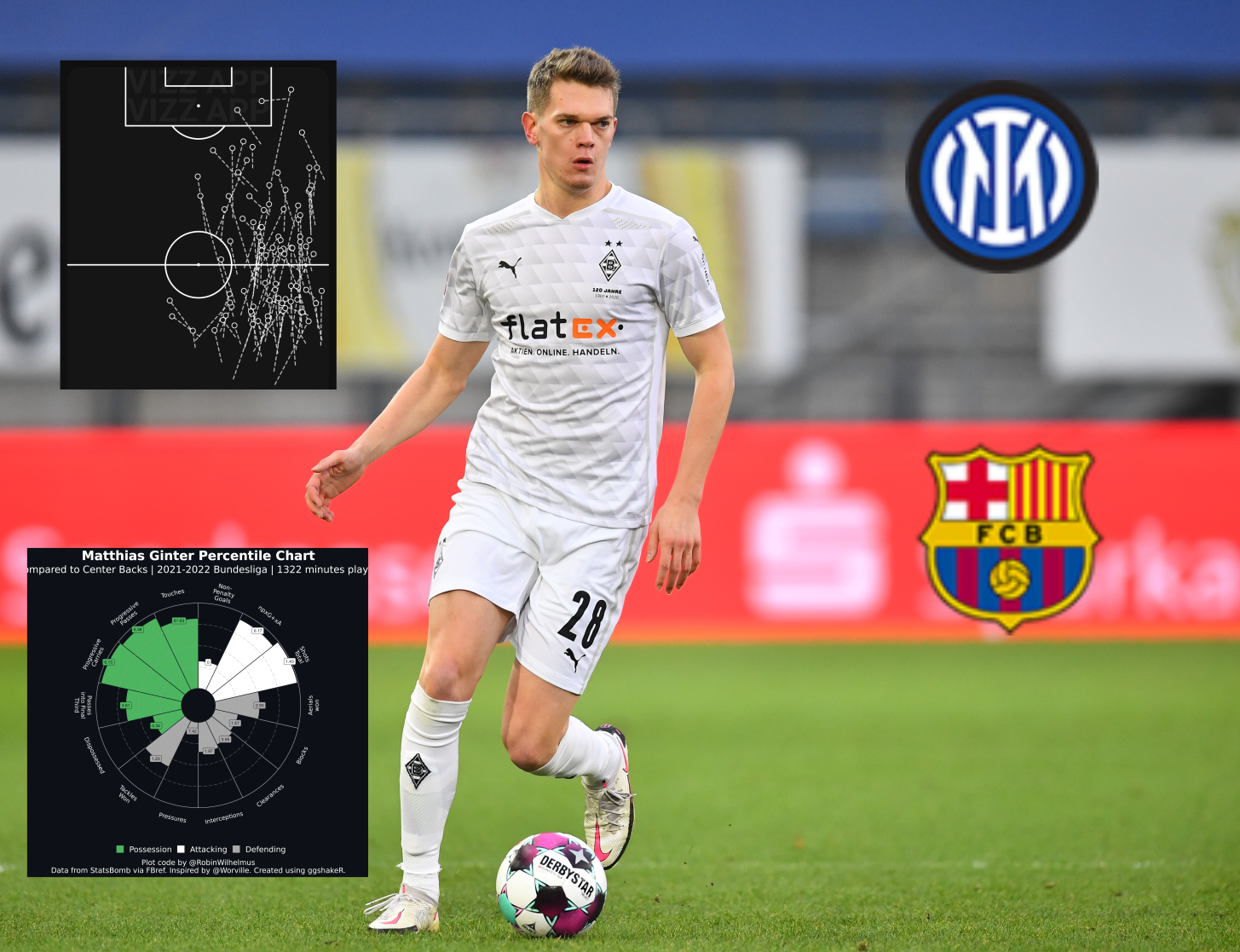 As we inch ever closer to the January transfer window, we are starting to get an idea of the players who will be leaving their current clubs in the summer when their contracts expire.

In accordance with the Bosman ruling, these players will soon be allowed to enter contract negotiations with other clubs, so we may well know their next destinations before the end of the season.

One of these players is Borussia Mönchengladbach’s Matthias Ginter, who announced his decision to leave the club in the summer via an Instagram post.

Let us take a look at what he might be able to offer to the clubs that are interested in his signature.

Ginter, now a 27-year-old German international, has a fair bit of experience under his belt with 278 Bundesliga appearances to go with 46 caps at the senior level for his country, including involvement in the 2014 World Cup-winning squad.

As far as positions go, he can do a job as a makeshift right-back or defensive midfielder but primarily is a centre-back.

Looking at his percentile pizza chart, it becomes clear that the ex-Freiburg man’s strengths clearly lie in possession and particularly ball progression, as his passing and carrying numbers really catch the eye.

Although his defensive statistics seem average at best, this is not necessarily a bad thing. Ginter’s style of defending is more reactive as he aims to slow the opposition down, which means he does not apply too many pressures or make lots of tackles and interceptions.

He does get the job done, though, as is proven by the fact that he has been dribbled past less than once on average in two full Bundesliga matches this season.

His defensive actions heatmap for the season backs this up, as it focused firmly within the defensive third.

For context, here is the same heatmap for Dayot Upamecano, a player who is considered a proactive defender:

The difference between the two approaches (and indeed teams’ defensive styles) is clearly visible. This is in spite of the fact that Bayern Munich have exclusively used a back-four in the Bundesliga this campaign, while Gladbach have spent roughly the same time in both types of systems.

Moving to Ginter’s greatest strength — his possession-play — it quickly becomes obvious why he performs best on the right of a back-three.

With the greater freedom provided by the role, his ball-carrying ability is allowed to fully flourish, so as you would expect, he does a lot more progressive carrying and gets further forward in the process while playing with two centre-backs alongside him…

…relative to what he does while having just one partner in the position.

Similarly, the German international’s progressive passing also gets a lot further up the pitch when operating in a three centre-back system…

…as opposed to a two centre-back system.

The data backs this up too, as Ginter’s progressive carrying distance has dropped from 148.34 yards per 90 in a back-three this season to 128.59 yards when playing in a system with just two centre-backs, while his passes into the penalty area are well over halved from 1.23 to 0.53.

Ginter also has an unusually high involvement in the final third for a centre-back. As is evident in his percentile pizza chart, he fires a fair amount of shots meaning he can pose a reasonable goal-threat from set-pieces, although he has failed to score this season.

Additionally, the ex-Borussia Dortmund defender is also sizeably involved in the creation of chances, as his 1.91 SCA (Shot-Creating Actions) per 90 in the ongoing Bundesliga season rank him in the 95th percentile for players in his position.

Evidently, Ginter is an experienced centre-back who can offer some very good things for his team when in possession.

The main question is where Ginter might end up. Inter Milan have already contacted the 27-year-old centre-back’s agent, and given their success with a back-three it is clear to see why they would want him.

They have a well-established centre-back trio of Milan Škriniar, Stefan de Vrij and Alessandro Bastoni who will be hard to displace.

However, the first two only have contracts until 2023 and concrete talks of renewals are yet to begin, so Ginter could well be brought in as a replacement for one of them or a competent back-up option.

The other two clubs that have been recently linked with the German international are Barcelona and Bayern Munich. A move to either club may not seem overly sensible at first glance as they are currently using back-fours.

On closer inspection, their use of an auxiliary right-back to form a back-three in possession could mean that Ginter slots into this role thanks to his on-ball and one-on-one defending abilities.

For the Rekordmesiter, the case seems quite simple – if Niklas Süle (whose contract expires in the summer) leaves, Ginter could be brought in as a direct replacement.

In Barcelona’s case, Clément Lenglet and Samuel Umtiti could reportedly leave and Gerrard Piqué is not getting any younger.

Given the state of their finances, a free transfer is just what the doctor ordered, and if Ginter does come in, he could allow Ronald Araújo to work as a centre-back instead of fulfilling that auxiliary right-back role.

Regardless of where he ends up, Ginter will surely be a very shrewd summer signing if profiled correctly.

Scout Report: Is Ferran Torres the forward Barcelona need?
Borussia Monchengladbach confirm Zakaria and Ginter will leave in the summer