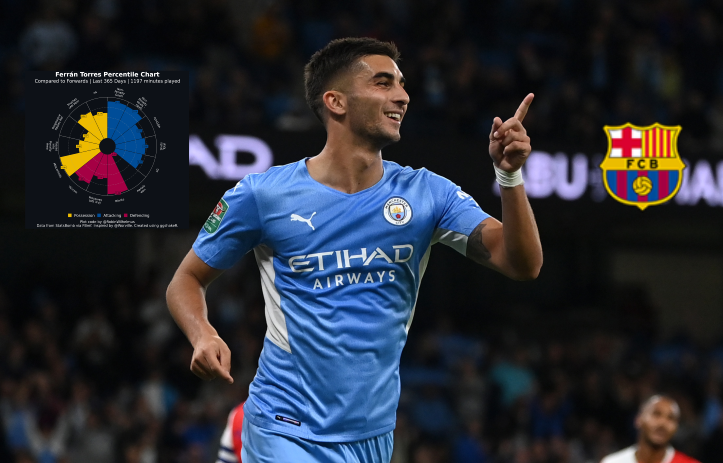 The 2022 January transfer window has barely begun, and we already have a bit of a surprise as Barcelona have spent €55 million (and potentially an additional €10m in add-ons) to sign Ferran Torres from Manchester City.

There have been whispers of this deal taking place for well over a month now, but the question always was as to whether Barcelona could actually afford to pay such a hefty fee given their current financial struggles.

They seem to have worked something out, so let us take a closer look at whether the 21-year-old forward is the sort of player the Catalan giants need right now.

When Torres joined Manchester City from Valencia in 2020, he was primarily viewed as a right-winger.

However, he has since been converted to more of a striker by Pep Guardiola due to City’s lack of depth in that position, and was solely used in that role before picking up an injury this season.

It is safe to assume that Barcelona plan to use him similarly since they have more than enough depth in the right-winger position in the likes of Ousmane Dembélé, Abde Ezzalzouli, Yusuf Demir and Sergiño Dest.

At striker, though, they have Memphis Depay, Martin Braithwaite (both of whom are not pure goalscorers) and Luuk de Jong, who does not seem to be a favourite of Xavi.

They could use someone who has a knack for putting the ball in the back of the net in that position, as is evidenced by the fact that they have underperformed their xG under their new manager.

Torres has only played four English Premier League matches this season so his sample size is small, but here is his shotmap from the season:

Even though he has just played 303 minutes, the Spanish forward has taken a very healthy number of shots from good positions, scoring twice from very close to the six-yard box.

Getting on the end of high-quality chances is a trait that Torres has had throughout his career – his tally of 15 goals in top-flight leagues from 13.5xG is testament to that.

Equally impressive is the movement he has shown inside the box to get on the end of crosses and cut-backs, which is something Barcelona are severely lacking right now.

Looking at his overall statistical performance in the last year, it is safe to say that the ex-Valencia man has done very well for a young player being converted to a new position.

His numbers are strong in all shooting-related metrics, and his chance creation and penalty box presence are not bad either.

Looking at his touchmap from the season, it is clear to see that Torres stays quite central and as far forward as possible. In this way, he can be used to stretch opposition defences thanks to the threat he offers with his pace.

With this understanding of Torres’ game, we can now explore how he will fit into Barcelona’s style of play. In case you need a refresher of how Xavi has looked to set them up, we have got you covered:

As is mentioned in that piece, they use this sort of a 3-2-5 system in possession:

Their use of a high and wide right-winger should eliminate Torres’ chances in that position for good since one-on-one dribbling is not his greatest strength, so he should ideally be deployed centrally.

That, in turn, poses questions about how Depay might be used, and the answer could be in the left-wing position.

In his time at Lyon, the Dutch international spent a similar number of matches on the left as he did through the middle and was slightly more productive out wide.

Even when he started as a striker, the ex-Manchester United man had the freedom to drift out wide and often gravitated to the left half-space, which is where he should find himself in the left-winger role at Barcelona.

Therefore, the signing of Torres might not just add a much-needed goal-scoring talent in Barcelona’s ranks, but it could also help them unlock the best out of Depay.

This deal could genuinely prove to be a win-win for all involved parties, as the player gets the promise of regular game time with a very exciting young squad, while Manchester City make a profit of more than 100% compared to what they paid for him a year and a half ago, which could well be invested in buying a world-class centre-forward soon enough.