Data Analysis: Is Dušan Vlahović really worth the hype? 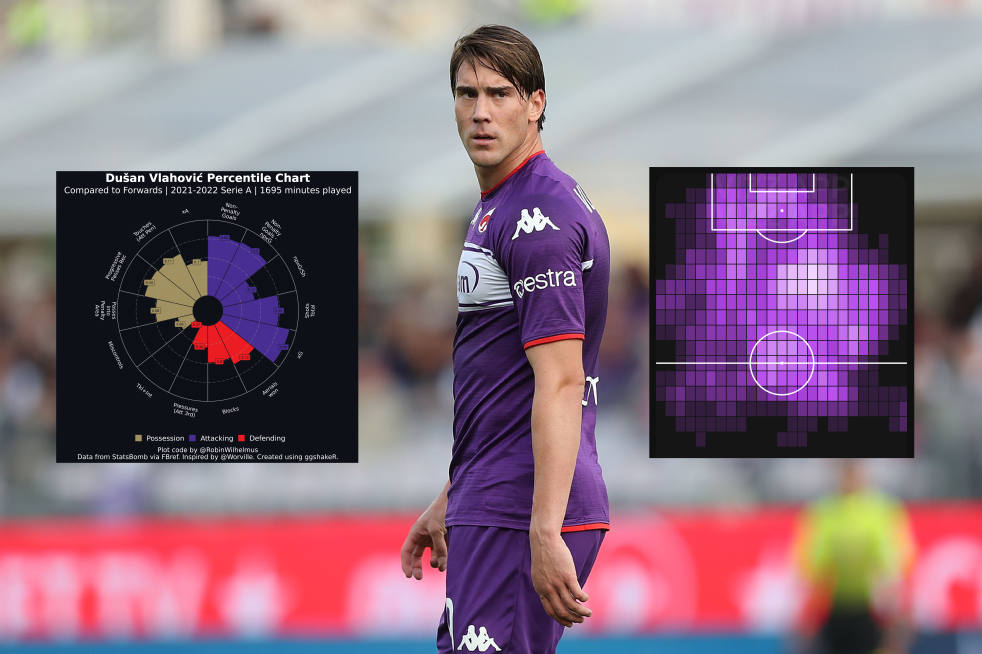 If you haven’t heard, Dušan Vlahović is scoring plenty of goals these days.

He is comfortably at the top of the Serie A scoring charts for 2021/22 at the halfway mark of the season and has even matched Cristiano Ronaldo’s record of most league goals in a calendar year in the Italian top-flight with 33.

The other important fact is that he has a year and a half left in his contract at Fiorentina and will not be signing an extension, meaning that a transfer is imminent.

It is possible that he will spend the rest of the season in Florence, given the club reportedly wants at least €70 million to be persuaded to part ways with him in January. However, his form and performances demand closer inspection immediately.

Looking at his raw goal-scoring numbers, it becomes clear that putting the ball in the back of the net is Vlahović’s greatest strength, which is what you would want from a striker.

The biggest question surrounding players like him is whether they can translate their performances to one of Europe’s top clubs. It is quite possible to make predictions with decent accuracy by examining their goal-scoring methods.

For Vlahović, this is where the trouble begins. Five of his sixteen goals this season have come from the penalty spot, which is not exactly viewed as a sustainable goal-scoring method.

This is a pattern visible throughout his career, as a concerningly high 27.2% of his 44 league goals so far have been penalties.

Excluding spot-kicks, the Serbian international’s numbers get interesting. He is unquestionably on a finishing hot streak this season with 11 non-penalty goals from an npxG tally of 7.3, but overall, his 31 Serie A non-penalty goals with an npxG of 29.4 do not look bad at all as far as sustainability goes.

Vlahović’s shotmap from this season is not the best around, though. He seems to take far too many shots from outside the box and tight angles despite scoring just once from those regions, which often wastes good possession for his team.

Additionally, he has registered very few shots inside the six-yard area, which highlights concerns around his movement in the box.

For contrast, here is the shotmap of another Serie A striker this season who seems to be much better at getting on the end of higher quality chances — Tammy Abraham.

It should not come as much of a surprise, therefore, that Vlahović’s npxG/shot reading from this season is 0.12, which only ranks him in the 43rd percentile when compared to all the other forwards in the league.

The bigger issue, though, is that the ex-Partizan Belgrade centre-forward is very much a one-trick pony. Granted, he is very good at that one trick of scoring goals, but many of the elite clubs and their managers might want more than just that from their striker.

As is evident in this pizza plot, Vlahović only shows up well in goal-scoring related statistics. Apart from that, though, his involvement in matches is minimal.

This is also clear in the fact that he has only averaged 33.4 touches per 90 this season, and his pass receptions heatmap is very heavily focused on the top end of the pitch, especially for a player in a mid-table side.

The 21-year-old striker’s defensive involvement does not look great either. However, part of that must also be attributed to Fiorentina’s defensive style.

Nonetheless, the fact is that Vlahović scores a fair amount of goals and therefore is hot property, so it is worth examining which clubs he is best suited to.

He has been linked to most of Europe’s elite clubs at some point (reliably or otherwise), but the likes of Barcelona and Juventus will almost certainly be unable to afford him in January.

Bayern Munich, Chelsea, Manchester United, Borussia Dortmund, Paris Saint-Germain and Real Madrid have star-strikers of their own who certainly will not need replacing in the middle of the season at least.

That pretty much only leaves the rest of the English clubs with a shot at buying the Serbian striker in the winter. The first name that pops out is Manchester City, who both have money and a need for a striker.

However, a player of Vlahović’s profile is probably not the right fit for them. This same reason should also apply to Liverpool if they are to be considered serious contenders in the first place.

It has been widely reported that Tottenham Hotspur will be looking for a striker in the January transfer window.

However, Vlahović does not exactly seem to fit Antonio Conte’s vertical style of play which demands an equal measure of creativity and finishing from the centre-forward.

That only leaves Arsenal, who could quite possibly want to sign an attacker in the upcoming window if Pierre-Emerick Aubameyang is not afforded another chance to get back into the side.

The Gunners certainly need a box threat and current first-choice Alexandre Lacazette is the opposite of that, but there have to be questions about how the Serbian striker would fit into Mikel Arteta’s possession-heavy system.

If Fiorentina demand a minimum of €70m for Vlahović in the winter, it seems unlikely and perhaps even not very sensible for any club to make a move for him, but as their asking price goes down in the summer, things should start to get interesting.

Stats courtesy StatsBomb via Fbref and Opta via Vizz App.