Tactical Analysis: The First Weeks of Xavi at Barcelona 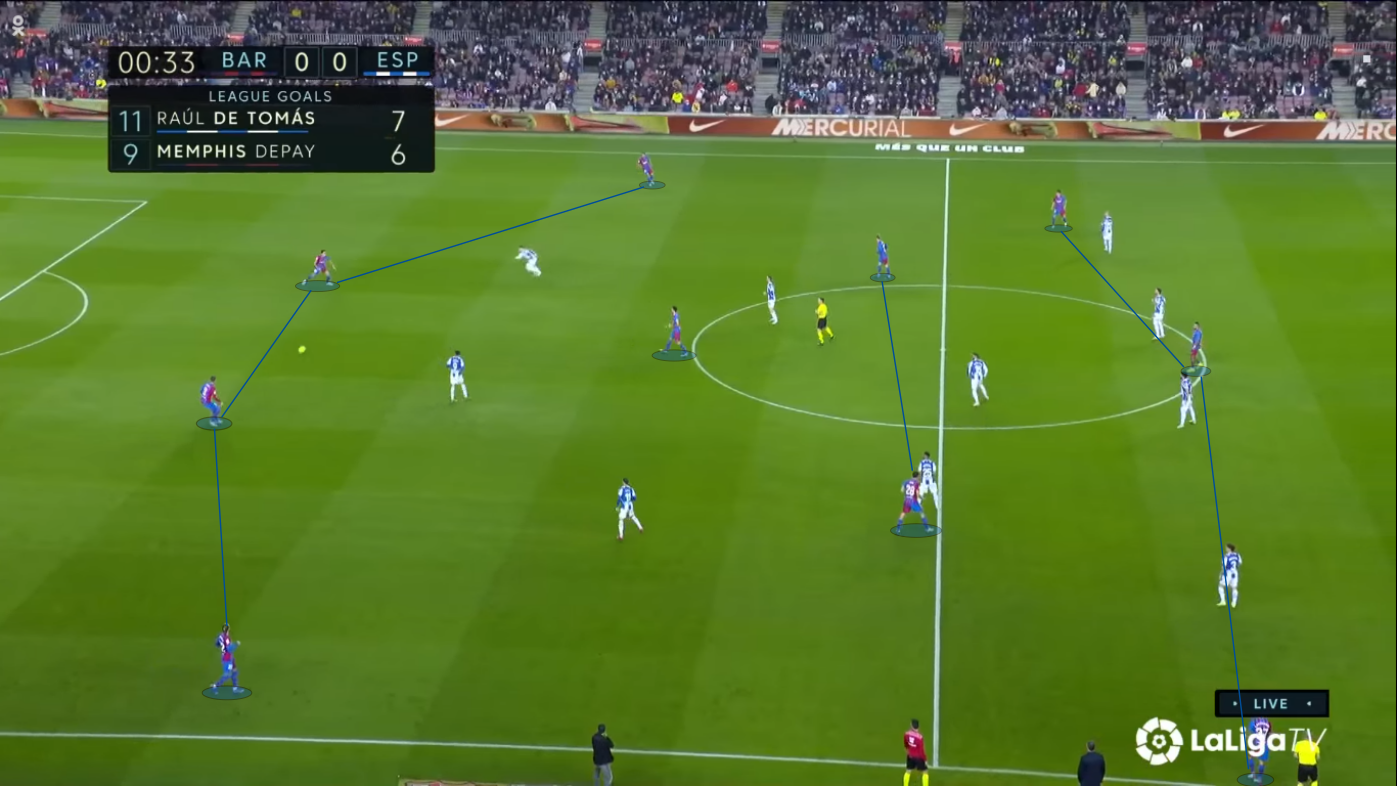 Barcelona’s managerial history is filled with ex-players and club legends, but the level of their success has been quite variable as is proven by two relatively recent examples – Pep Guardiola and Ronald Koeman.

The latest entry in that list is Xavi, who took over following Koeman’s departure having previously made 767 appearances for the club as a player. His simple objective – rebuild Barcelona.

The historic Catalan club’s fall has been documented all too well, so it should not have been too much of a surprise that Barcelona were only in the top half of the standings thanks to goal difference when their latest manager came in.

They have now somewhat recovered to eighth with a game in hand, which could see them come very close to a European spot.

The first phase of Xavi’s rebuild is primarily ideologically, so although the results might not come instantly, things have certainly started to change.

As far as formations go, Xavi has used a 4-3-3 in all but two matches where he deployed a back-three, although the system remained similar (more on that later).

Excluding those games, we can look at the players he has used in the 4-3-3.

Clearly, Xavi is yet to find a clear first-choice XI, but this is a result of both experimentation and injuries.

In the build-up phase, Barcelona’s 4-3-3 shape stays largely the same.

The left-back (usually Jordi Alba) pushes slightly further forward than the right-back, who is typically a centre-back by preferred position as the previous visualisation shows.

This is mirrored by the wingers, as the right-winger stays high and wide while his counterpart on the other side (usually a midfielder by trade) moves inward, sometimes even occupying the half-space.

Marc-André ter Stegen’s shot-stopping might not be great at the moment, but he still is decent with the ball at his feet. Therefore, from goal kicks or when facing a high press, he splits the two centre-backs to aid the build-up.

As they get to the progression phase, Barça‘s shape changes to more of a 3-2-5, with the left-sided midfielder usually forming a double pivot alongside Sergio Busquets (the defensive midfielder) while the left-winger moves into the half-space, allowing Alba to get forward on the wing.

This is why the right-backs Xavi chooses are usually natural centre-backs, as their role is more that of an auxiliary full-back since they form a line of three with the centre-backs in possession.

This is the reason that Xavi’s switch to a back-three did not necessitate a change in system, as the 3-2-5 can be created by simply pushing the wing-backs forward.

The gap in distance between the right-back and the attackers on the side is reasonably big, while there are more players and rotations on the left, so Barcelona’s ball progression is very left-biased.

This is clear in their progressive pass receptions heatmap.

The right side is, therefore, mainly used to stretch opposition defences. Due to the lack of natural right-wingers in their first-team squad, Abde Ezzalzouli has been promoted from the B-team and has done a terrific job in a role, which encourages him to take defenders on 1v1, completing 15/24 dribbles under Xavi so far.

While Barcelona have been good at getting the ball into advanced areas, they are still struggling to convert territorial dominance into quality chances, often missing the all-important final pass.

Despite averaging 198.2 touches in the attacking third per match, they have scored just six goals in six games so far, with five of those coming in two matches. Their underlying numbers are encouraging, though, as they are underperforming their xG by 1.3.

The most identifiable pattern of goal-scoring for them has been long balls played in behind the opposition from deep, with a midfielder getting on the end of it as the striker pulls the opposing centre-backs away.

Their shotmap doesn’t look great, with too many low-quality shots taken, especially on the left side.

Nonetheless, this is something they can work on and as the players spend more and more training sessions getting accustomed to the ins and outs of the new system they are operating in, things will start to improve.

Counterpressing is an important aspect in Xavi’s game model of both attacking and even defending by controlling possession, and the 3-2-5 shape naturally has a good rest defence set-up to facilitate that.

Against Real Betis, he went a step too far by picking Sergiño Dest at right-back and asking him to get forward too, as this passing network indicates.

That left just the two centre-backs in the last line of defence, and Barcelona got pummeled down the wings in transition. Ultimately, Betis scored the only goal of the match in this exact manner.

The biggest issue by far, though, has been how Xavi has set his team up out of possession. His biggest critique at Al Sadd was that he paid too much attention to how his side worked in possession and neglected their defensive set-up.

This seems to be the case so far at Barcelona too, as they don’t really seem to have a fixed defensive structure and instead rely too heavily on man-marking, which any good possession-based side can exploit.

They have tried to press high on occasion, but their structure has been disjointed.

The stats back this up, as Xavi’s Barcelona have only restricted their opponents to a tally of less than 1.0 xG in one of their six matches (!), conceding five goals in the process. Clearly, their defence has been very leaky.

While the 41-year-old Spanish manager will undoubtedly have to do a lot of work on the defensive front, the bad news is that he might have to change things in his system in possession too. In the last week, both Jordi Alba and Memphis Depay have suffered injuries that will keep them out for the foreseeable future at least.

Both of them have been key players under Xavi, and since Barcelona do not have any like-for-like replacements in either position of similar quality, things could get even tougher for them.

Xavi’s Barcelona rebuild was never going to be easy, but luck has not been on his side. He certainly has already started to bring back the Barcelona way of playing football to the club, but whether the results follow suit is a different matter altogether.

Stats courtesy StatsBomb via Fbref and Opta via VizzApp.