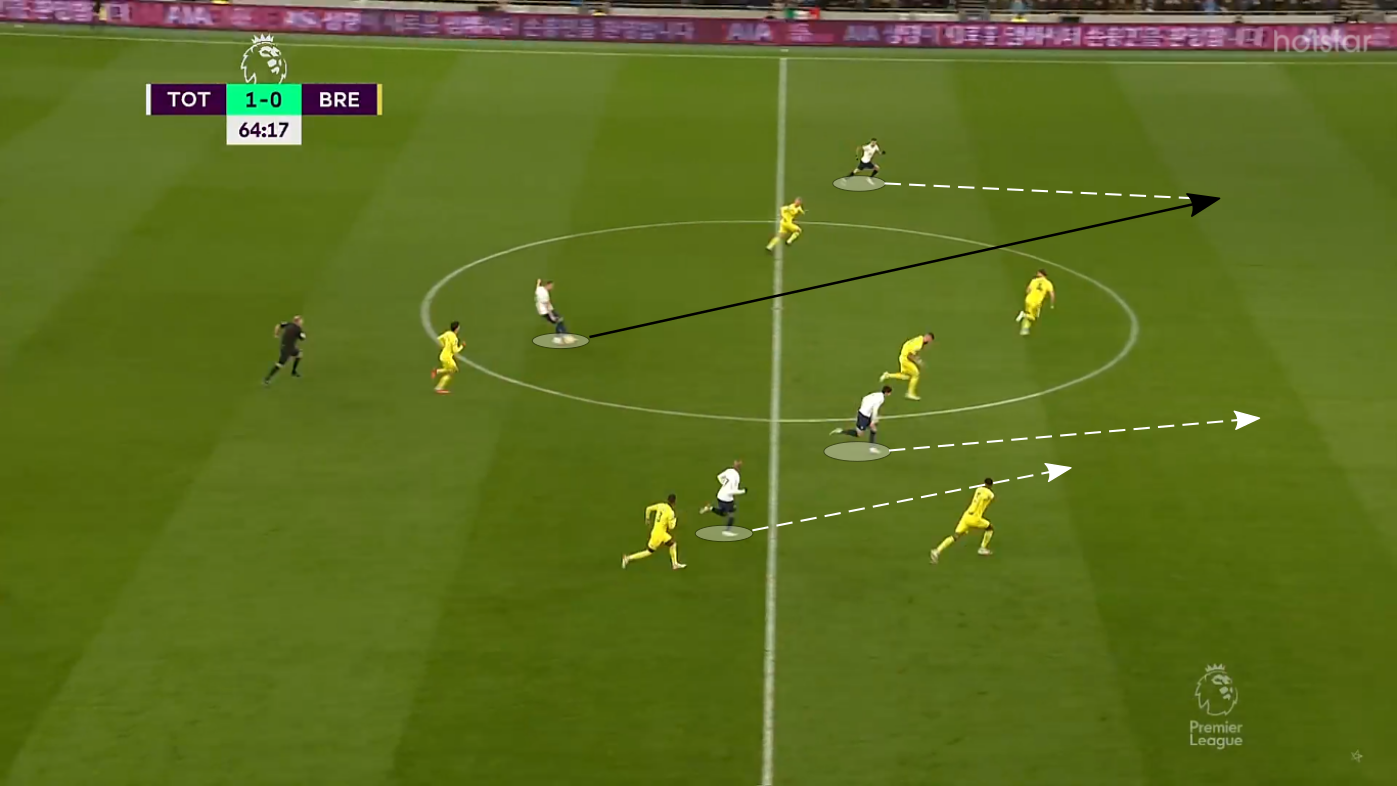 When Nuno Espirito Santo was relieved of his duties as the manager of Tottenham Hotspur, they were languishing just two spots away from the bottom half of the table.

At the time of writing, they have broken into the top six and could go even further thanks to their game in hand.

The man largely responsible for this turnaround is Antonio Conte, who has come in and quickly transformed the style of play at the club.

Without the benefit of a transfer window, the Italian tactician has had to make do with the personnel present at the club.

He has done so by using a 3-4-2-1, which masks Tottenham’s lack of quality depth in central midfield while also suiting his preferred vertical style of play.

Under their previous manager, one of Spurs’ main issues was their terrible structure in possession, which failed to break down even the worst defensive structures. That was the first thing Conte had to work on.

From the very first match he oversaw against Vitesse, the ex-Juventus manager’s ideas became very clear and visible.

Building up from deep inside their own half, his team usually employs a 4-2-5 with the keeper moving to the left of the central centre-back and the wing-backs pushing forward.

With just an average of 31.5 touches and 22.5 passes completed per game in the four league matches so far, Hugo Lloris clearly is not involved in possession unless necessary.

In fact, against Norwich City, he seemed to be instructed to stay away from the action even when the ball was with his defenders in the box.

Despite that, he had a few shaky moments in the match, highlighting his weaknesses which high-pressing opponents could target.

Therefore, most of Spurs’ work is done without the keeper involved in a 3-2-5.

The centre-backs are, of course, chiefly responsible for progressive passing towards and into the opposition half.

Since the right centre-back position has seen a lot of rotation, we can only see a healthy number of such passes for Eric Dier and Ben Davies.

Davies quickly established himself as the first-choice left centre-back under the new manager, and his abilities as a left-back mean he is encouraged to get forward and make overlapping or underlapping runs depending on the left wing-back’s positioning.

Naturally, therefore, his touchmap does not look like a typical centre-back because of a strong involvement in more advanced areas.

The ex-Swansea man has done a very good job in this role, getting an assist against Norwich City to show for his impressive performances in the last four league matches.

In front of the Welsh international, Sergio Reguilón has also enjoyed good times in the left wing-back position.

With support from Davies, he has consistently managed to overload opposition defences on their right and produced very good end-product in attack, accumulating 1.1 xG and an even more impressive 1.6 xA in his last three full league matches (he was forced off with a minor injury against Norwich).

Conte’s favoured midfield duo comprises Pierre-Emile Højbjerg (who is comfortably the best all-round midfielder at the club) and Oliver Skipp, who has taken his game up a notch under the Italian manager and thoroughly impressed.

Højbjerg has a slightly more box-to-box role, sometimes even dropping into the defensive line in the build-up to allow Davies to get forward freely. This was an especially notable pattern in the matches against Brentford and Norwich City.

At the other end of the pitch, he likes to pop up at the edge of the box with late runs. Case in point – his goal against Leeds United.

…is a lot more scattered than that of Skipp…

…who tends to stay in central midfield or at best move out to the right wing (when playing on that side) to cover the space behind the wing-back, in a manner roughly similar to what Davies does on the left, albeit to a lesser extent.

The 21-year-old academy graduate’s ability on the ball in midfield is quite crucial, as he has a key role in getting his side into the final third both through progressive passing and carrying.

Progressive passes in such a system typically would go into the feet of the wing-backs out wide, but since Conte likes his teams to play direct vertical football, the front-three are also asked to receive by dropping deep.

These heatmaps also show how the Harry Kane-Son Heung-min dynamic has continued to work with Conte, with the latter receiving relatively fewer progressive passes on the left as his main task is to make runs in behind while the English striker often helps create chances from deeper positions.

One of Conte’s most notable imprints on a side is the fast attacking transitions he encourages with quick one-touch vertical passing and relays.

Tottenham showed signs of doing this from his very first match in charge and have scored a couple of typical goals for a side coached by the 52-year-old Italian manager.

The first came against Vitesse, where Lucas Moura flicked a forward pass into Kane…

…who turned his defender and returned the ball to the Brazilian…

…and the move ended with him coolly converting the one-on-one chance without needing Son’s support.

The second was against Brentford, with Son laying the ball off to Kane this time…

…who helped it out wide to Sergio Reguilón.

The Spaniard then darted into the box before squaring it to Son, who simply had to tap it in.

Most of Tottenham’s key passes under Conte have originated in zone 14, which is a pattern common for teams that like to attack in transition as it usually means that these passes go into spaces behind the opposition’s disarrayed defence.

So far, Spurs’ attack is doing quite well under Conte. In his first six matches in charge, they have scored 11 goals.

Contrasting with their xG tally of 6.9 in the Premier League, their seven goals also shows a very healthy chance creation and conversion rate.

Lucas, Kane and Son pretty much instantly hit it off in their attacking partnership, cumulatively getting 10 goal involvements under their new manager.

Tottenham’s defensive set-up is also shaped in a way that is conducive to counter-attacking. Without the ball, they drop into a narrow 5-2-2-1 mid-block with little pressing as the focus is on preventing the opposition from progressing centrally.

This is achieved through Kane man-marking one of the opposition central midfielders out of the game, while the others are dealt with by Spurs’ holding midfield duo in a similar fashion.

This narrowness of the wide attacking midfielders (who are the two main outlets in transition) is the key to what makes this shape suitable for counterattacking.

This is because this opens up an obvious passing option to the full-backs or wing-backs for the opponents, after which involves the wide attacking midfielders close down them down and try to win the ball back by pinning them against the touchline.

This is why most of Spurs’ defensive actions in the attacking half are on the sides.

The wide centre-backs are especially encouraged to stay tight to their men and even follow them into midfield if necessary to cut out passes.

This sort of defensive system has its risks – if the wide midfielders let the opposition full-back go past them without applying enough pressure, Spurs’ defence could be exploited down the wings.

Consequently, there has been a clear pattern in the chances they have conceded under Conte, as an overwhelming majority of them have originated out wide.

Overall, Tottenham Hotspur have done a decent job defensively under Conte, letting in just one goal in their four league matches.

The underlying statistic of 3.5 xGA paints a slightly more realistic picture and shows that there is work to be done.

The story in the Europa Conference League is also different, but there are good reasons for that — the Vitesse match was Conte’s first in charge after just a day, and the red card against Mura made things difficult in that game.

To conclude, Tottenham have improved notably under Conte. In just six matches, he has managed to make them look like a completely different side to the one that lost 3-0 to Ole Gunnar Solksjær’s Manchester United.

As he has done throughout his career, the Italian manager has also elevated the performances of numerous players who were on the fringes of the squad under the previous manager, but he will probably be looking to spend some money in the winter transfer window to bolster his options.

Tottenham’s Conte-led transformation is on the right track, and quite likely for the first time in a while, they will consistently be able to perform at the level that their fans and chairman hope to see.

Silverware might be too much to hope for, but a fight for a top-four finish has to be considered very much on the cards.