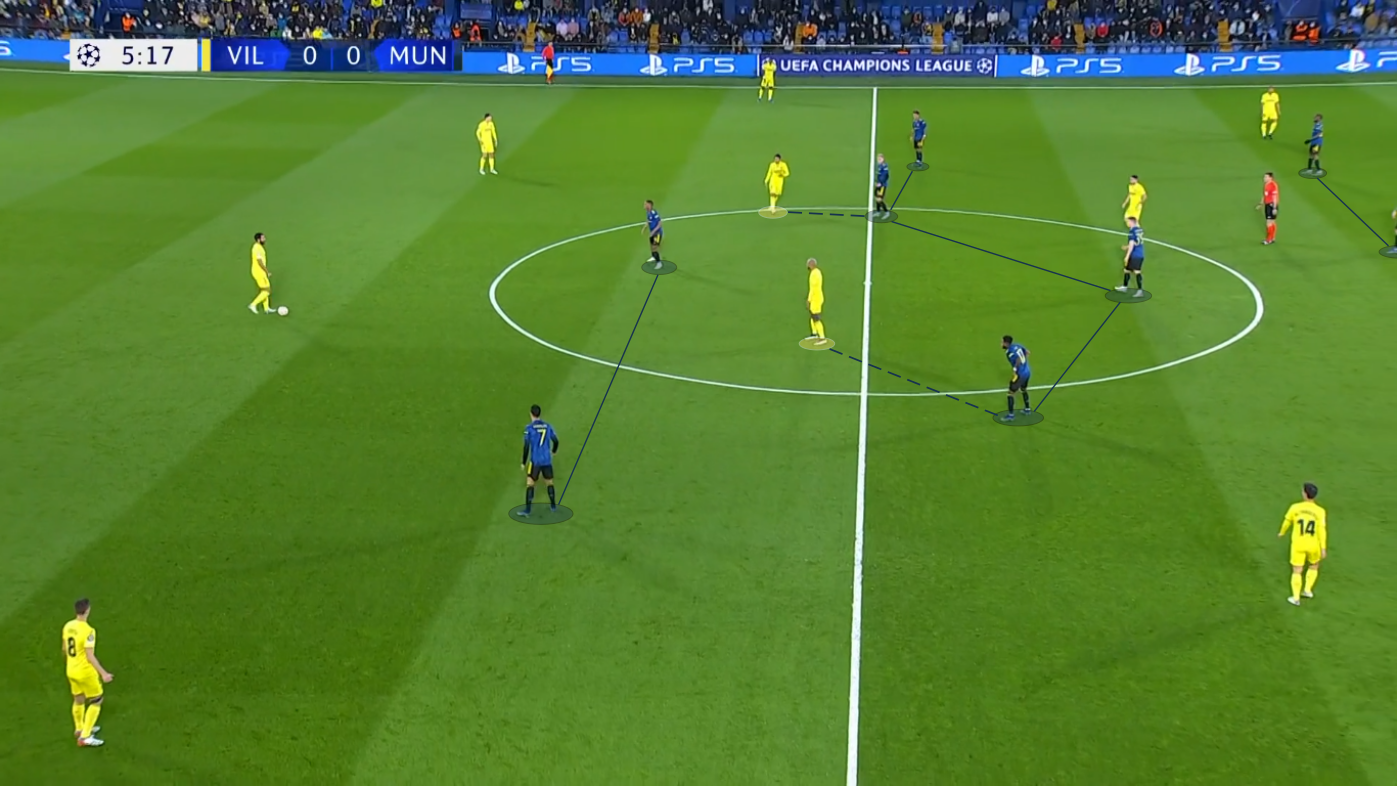 There were some unusual sights in Michael Carrick’s first match in charge of Manchester United, such as Donny van de Beek kicking off a football match.

But eyes were being rubbed and TV screens were being checked when even more surprisingly, it appeared that United had a proper structure out of possession.

One of the Red Devils’ biggest problems this season has been their inability to defend with any resemblance of a compact shape.

To be fair to Ole Gunnar Solksjær, he did have them defending respectably against the top sides last season, but he has been unable to replicate that since the arrival of Cristiano Ronaldo and his lack of output without the ball.

This was never more apparent than in the game against Liverpool at Old Trafford, where the hosts were carved apart effortlessly on numerous occasions due to their completely disorganised attempts at pressing and defending.

After Watford delivered the knockout blow to Solksjær, it was Carrick’s turn to manage the side for an interim period until a candidate was selected to at least guide them to the end of the season. The first line-up he named looked like this:

While the formation was a 4-4-2 on paper, the side operated in what was a lot more like a 4-3-3 system in possession as Fred tucked into central midfield (his natural position) while Ronaldo or Anthony Martial drifted out to the left and Jadon Sancho completed a three-man front-line.

It has to be said that the visitors didn’t improve much in terms of having a structured, systematic and purposeful build-up shape, as is highlighted in this passmap:

Clearly, there was little to no progression in the central areas as the back-four seemed to circulate the ball around between themselves more than anything, and the whole team is positioned very deep with no player’s average position reaching the attacking third.

However, there is little one man can change in half a week, and Carrick seemed to be focusing on the defensive side of things.

His work yielded results too, as Villarreal were restricted to generating an xG tally of just 0.62, with that figure going further down to 0.46 when you take set-pieces out of the equation.

United defended just as they lined up — in a 4-4-2. They were mainly happy to drop into a relatively narrow and compact mid-block, with Scott McTominay typically staying deeper than the rest of the midfield line to close down any spaces between the lines.

Despite being the left-most in the line, Fred’s positioning was central as he stuck tight to Étienne Capoue, while Donny van de Beek had a similar task against Dani Parejo.

Although they had a front-two, Martial tried to be as central as possible while Ronaldo watched from the left.

This lopsidedness was a conscious decision to mask Ronaldo’s defensive weaknesses. With him in the centre, any team could easily exploit this, but on the wing, they would have to focus their play down his side.

In Villarreal’s case, though, it wasn’t that easy for them to simply progress down the right. Their current structure and personnel are geared to penetrate opposition defences on the other side, where Pervis Estupiñán makes threatening overlapping runs from left-back and, more importantly, top-scorer Arnaut Danjuma tries to isolate a defender and beat him one-on-one with his tremendous dribbling ability.

Therefore, despite a clear weakness on United’s left, 47% of the hosts’ attacks were concentrated on the other side.

Their passmap highlights a left-sided bias, with Juan Foyth failing to make too many forward connections and Yeremi Pino completely isolated on the right.

This is also where Martial’s central position came into the picture, as it enabled him to pressurise Raúl Albiol (Villarreal’s right centre-back) and prevent him from freely carrying the ball forward.

As Villarreal advanced into United’s half, the visitors’ block collapsed further with an emphasis of preventing any spaces opening up between the lines, so the midfield became a lot more horizontally aligned.

Crucially, there was no high pressing done as Ronaldo’s presence in the front-line would make that a difficult task. As a bonus, this also meant that the defence would not need to maintain an overly high line, so Harry Maguire’s relative lack of pace or David de Gea’s reluctance to come off his line would not be exposed.

United chose to slowly retreat into a midblock from goal kicks and allowed the Villarreal centre-backs to carry the ball out of their defensive third.

Any passes into midfield were met with substantial pressure from Fred, van de Beek and McTominay.

As a result of the Red Devils’ narrow defensive structure, the hosts were often forced to progress down the wings, where their wingers were usually double-marked by the corresponding full-back and wide midfielder.

These two patterns should explain the absence of United’s defensive actions at the top end of the pitch and their heavy concentration in the wide areas, which this heatmap shows:

…and caused the ball to bounce into Ronaldo’s path, with the Portuguese international able to chip his finish over an out of position Gerónimo Rulli.

United always posed a counterattacking threat simply due to the tremendous quality of their players.

Whether it was Sancho, van de Beek, Bruno Fernandes or Marcus Rashford, most of their attackers in the midfield line had the ability to carry the ball forward at pace, beat opponents and pick a killer pass while the rest could make intelligent runs into useful positions.

This was a common pattern in matches against the top sides under Solksjær until last season, and it is how they got their second goal in this game.

United’s performance was not complete, though, even if we just look at their defending. De Gea did have to make a couple of crucial saves, and truthfully, this style of play only worked because Villarreal needed the three points more than them due to the matchday 2 result.

Even though Carrick was indeed a part of the previous coaching staff, a bit of new manager bounce could very feasibly have had a role to play in this performance.

Once again, though, all of this is not sustainable, but the good news this time is that United’s current manager is only supposed to stay in charge for a short period of time until a proper replacement is found. Sound familiar?

Stats courtesy Vizz App and Opta via FotMob and WhoScored.