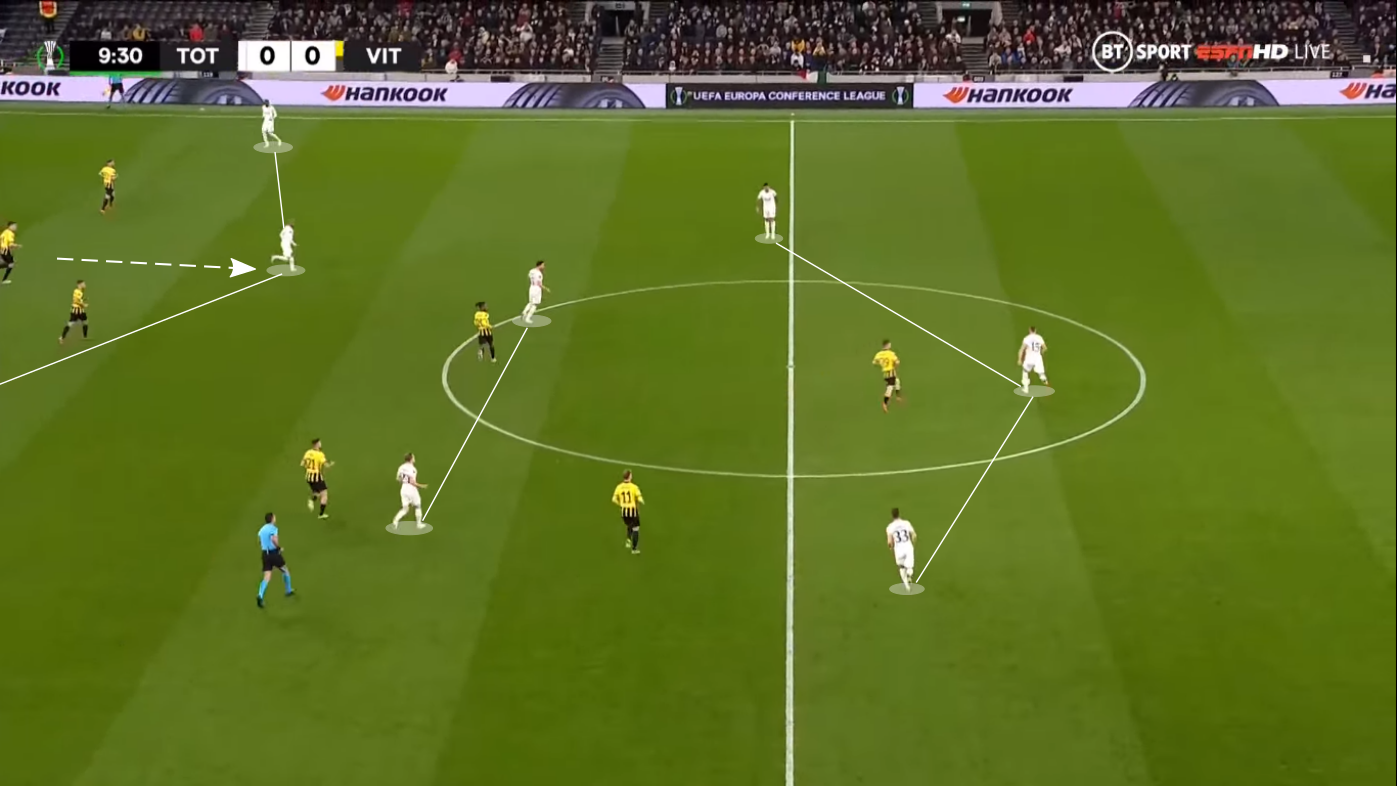 After a couple of damaging appointments, Tottenham Hotspur finally struck gold on the managerial front as they hired Antonio Conte following the dismissal of Nuno Espirito Santo.

There was plenty of intrigue surrounding Vitesse Arnhem’s visit to London for their Europa Conference League game last night, as the footballing world was eager to see the first glimpses of what Conte’s Spurs might look like.

The first indications came an hour before the match when the line-ups were announced.

Tottenham were evidently no longer following the policy of fielding a second-string side in the competition, as they started their big-hitters in a 3-4-3 formation.

Going by this, there were a couple of possibilities as far as Spurs’ system in possession was concerned. Ultimately it turned out to be a 3-2-5 of sorts that bore a stark resemblance to what Thomas Tuchel started with at Chelsea.

Whenever they were forced back into their own third by the respectably good Vitesse press or had to take short goal-kicks, Tottenham’s shape resembled a 4-2-5 as the wingers tucked inside to allow the wing-backs to get forward.

Eric Dier moved to the right of Hugo Lloris in the backline, and the wide centre-backs got closer to the touchline. In such cases, Oliver Skipp typically dropped slightly deeper to create a lopsided double pivot as he offered a passing option into midfield.

With 16 successful passes out of just 25 attempted, Lloris was not a key part of the hosts’ build-up. That is why they primarily worked with a 3-2-5 in possession, which started to take shape further up the pitch.

Here, the wingers dropped deep in the half-spaces very frequently to offer themselves as progressive passing options. In this way, Spurs had a lot of verticality in possession.

Harry Kane occasionally moved backwards for similar reasons, with at least one of the wingers usually making a run in-behind simultaneously to latch onto the flick-on he would provide.

Tottenham’s second goal epitomised the aforementioned verticality in their attacks. The move gathered pace with a ball played from their own third into Lucas Moura dropping deep, and he helped it on to Kane…

…who spun his defender before returning a through ball to his Brazilian teammate.

Heung-min Son was also there, but he was not needed as Moura slotted the ball home in a one-on-one against the keeper.

Although Tottenham’s main route upfield was centrally through this sort of vertical passing, they were also able to make a decent bit of progress on the left.

That was partly down to Ben Davies acting as an overlapping centre-back on occasion, which he can do to good effect thanks to his primary position being left-back.

The Welshman played a vital role in the third goal, as he received Sergio Regúilon’s pass by making an untracked run into the box…

…before attempting a shot-turned-pass in Kane’s direction, who forced the defender to bundle it over the line.

There were no real surprises from a defensive standpoint, as Tottenham used a mid-block like most Conte sides. Their formation, of course, was a 3-4-3, with a narrow front line against the Vitesse back-three and the wing-backs staying forward as their counterparts were not very adventurous in terms of positioning.

This was backed up by some very good front foot defending by the centre-backs – most notably Cristian Romero – to cut out longer passes.

However, this style of defending is a double-edged sword, and we saw that as well in this match with Romero picking up two yellow cards before the hour-mark.

If Conte chooses to use a back-three with the Argentine centre-back in it, this is a risk he will continue to take.

Overall, Tottenham’s defensive structure was quite sound for a first match in a new shape, although some poor work in a set-piece situation and individual errors contributed to the two Vitesse goals.

Conte should be credited with how his substitutions managed to see the game through despite a numerical disadvantage, particularly as he sent Tanguy Ndombele on to outnumber and gain more control in midfield.

The most encouraging aspect of this performance was the possession-play and attacking rotations, which were the main areas of weakness under the previous manager.

Spurs could easily play through Vitesse’s block with some slick vertical football, and they also found openings out wide.

Yet, there will always be a caveat that Conte’s side will have to face very different teams to their Dutch opponents both stylistically and qualitatively.

Vitesse’s double pivot was inadequate in closing down the spaces in midfield, but most other sides will not be opened up so easily.

Against high-quality pressing opposition, Lloris may be susceptible to making a few errors giving his relative lack of comfort on the ball.

Finally, it remains to be seen whether the Italian manager persists with this same system and personnel in his first-choice XI.

The attackers all performed very well, but Conte could quite possibly look to shift to a three-man midfield or shake up the centre-back selection. Only time can give us the answers to this question.

For the first time in a while, though, there is a real sense of hope and excitement around Tottenham Hotspur, and it will come to the Premier League this weekend when they travel to Merseyside to face Everton.

That fixture could start giving us some hints regarding the previous questions posed at the end of this match.